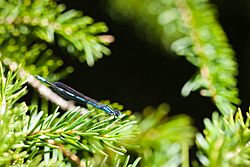 The boreal bluet (Enallagma boreale) is a species of damselfly in the family Coenagrionidae.

The boreal bluet is a small damselfly with a length of 1 to 1.6 inches (26 to 40 mm) long. The male is predominately blue on the sides of its thorax, and the upper side of its abdomen. Its lower abdominal appendages are longer than its upper appendages. The female's body is greenish-yellow to brown color. The upper side of its abdomen is mostly black.

The nymph of the boreal bluet is small in size with a length of 0.75 to 1 inch (19 to 23 mm). It has the typical slender shape of many immature damselflies. Nymphs range in color from light to dark brown.

The boreal bluet occurs along lakes, ponds, marshes, and streams with slow to moderate flow. This species occurs in a wide variety of habitats, from sagebrush desert to mountain lakes.

The boreal bluet eats a wide variety of small soft-bodied flying insects, including mosquitoes, mayflies, flies and small moths. They will sometimes pick small insects such as aphids from plants.

The nymph eats a wide variety of aquatic insects, such as mosquito larvae, mayfly larvae, and other aquatic fly larvae.

Male boreal bluets set up territories at their choice breeding sites. After both genders mate, the female boreal bluet oviposits in aquatic vegetation.

Like many bluets in the genus Enallagma many species look similar to each other. The boreal bluet looks has similar to many bluet species. They include the northern bluet, familiar bluet, Hagen's bluet, marsh bluet, and vernal bluet. It can be distinguished from familiar bluet by the large postocular spots and the shorter cerci. The characteristics shared by northern and boreal bluets are their large eyespots, and a mushroom-shaped black spot on abdominal segment S2. Its best seen dorsally.

Enallagma boreale has two different subspecies. The following are the two subspecies:

All content from Kiddle encyclopedia articles (including the article images and facts) can be freely used under Attribution-ShareAlike license, unless stated otherwise. Cite this article:
Boreal bluet Facts for Kids. Kiddle Encyclopedia.