Bragg Creek is a hamlet in southern Alberta under the jurisdiction of Rocky View County in Division No. 6. It is also recognized as a designated place by Statistics Canada.

Bragg Creek is named after Albert Warren Bragg from Collingwood, Nova Scotia and his 14-year-old brother John Thomas who homesteaded in the area in 1894. The community was established between a forestry reserve, the Sarcee Indian reserve and a Provincial Park. Ranching was the original primary economic generator in Bragg Creek. The economy diversified with the emergence of recreation in the 1920s.

Bragg Creek was featured in the feature films Storm (1987) and Killer Image (1992) both directed by David Winning, and also Betrayed (1988) directed by Costa-Gavras. During the 1990s, CBC aired the television program North of 60, which was mainly filmed in Bragg Creek. The town was the filming location for the new BBC/Discovery Channel series Dinosapien (2007) and the 2009 CBC television series Wild Roses, as well as portions of the movie FUBAR.

In the late spring of 2005, Bragg Creek and areas surrounding the Elbow River were put on a flood watch and eventually voluntary evacuation when the river rose over 2 metres, overflowing and eroding in some places. The majority of Bragg Creek buildings were damaged in this event, as were the majority of houses in nearby Redwood Meadows. The voluntary evacuation was not met with widespread co-operation, as many residents stayed to battle the flood by building makeshift dams. Bragg Creek has since recovered from the event. 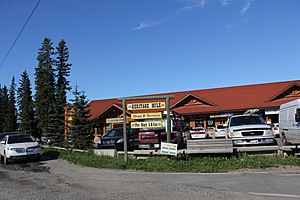 The store in Bragg Creek

Bragg Creek is popular for shopping, with its quaint shops, restaurants, and mountain scenery.

The area is a popular spot for vacations and short day trips from Calgary. It is near the Rocky Mountains and Kananaskis Country. The Elbow River and the scenic Elbow Falls are a short distance away.

There are many recreational areas in the area. These include Bragg Creek Provincial Park and the Canyon Creek Ice Cave, also known as the Bragg Creek Ice Cave. There are numerous hiking/biking trails, equestrian trails and picnic/camping areas. Downhill skiing used to be popular, although since the abandonment of the nearby downhill ski centre, Wintergeen, only cross country skiing facilities are available.

Many summer camps, such as Easter Seals Camp Horizon and Kamp Kiwanis are also near Bragg Creek.

The powderface42, a marathon and half-marathon takes place in the vicinity every year. This event is called a mountain marathon, but is more like a classical marathon running race rather than the multi-day mountain marathon events in the UK. The race does not have a navigational element to it; participants run on a predefined and marked course with water stations along it.

All content from Kiddle encyclopedia articles (including the article images and facts) can be freely used under Attribution-ShareAlike license, unless stated otherwise. Cite this article:
Bragg Creek Facts for Kids. Kiddle Encyclopedia.