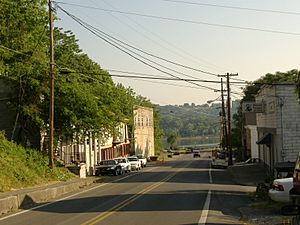 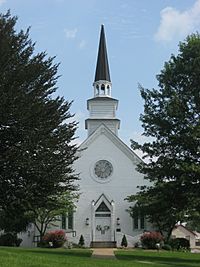 Brandenburg is a home rule-class city on the Ohio River in Meade County, Kentucky, in the United States. This city is forty-six miles southwest of Louisville. It is the seat of its county. The population was 2,049 at the 2000 census. The city was not named after Brandenburg, Germany, but for a local barkeep and land owner. 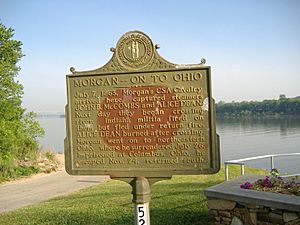 Brandenburg was built on a 3,000-acre (12 km2) tract of land called Falling Springs, purchased in 1804 by Solomon Brandenburg. He opened a tavern around which the community grew. In 1825, the community became the seat of Meade County, but it wasn't formally incorporated by the state assembly until March 28, 1872.

During the Civil War, Confederate General John Hunt Morgan crossed at Brandenburg to start his raid into Indiana in July, 1863. During the Battle of Brandenburg Crossing, two men on the Indiana side of the river were killed by cannon fire from Brandenburg. A Union gunship was deployed to block the crossing, but it ran out of ammunition and Morgan and his men were able to pass into Indiana.

Brandenburg was devastated by an F5 tornado during the Super Outbreak of April 3, 1974. Thirty-one residents lost their lives in this city. There was no early warning from tornado sirens or NOAA Weather Wire Service about the storm. About an hour after the storm, the same supercell spawned an F4 tornado that formed in the southwest part of Louisville in Jefferson County near Kosmosdale. Three people lost their lives in this storm, but it also left two hundred and seven injuries.

There were 844 households out of which 33.6% had children under the age of 18 living with them, 43.4% were married couples living together, 15.6% had a female householder with no husband present, and 36.5% were non-families. 32.1% of all households were made up of individuals and 12.9% had someone living alone who was 65 years of age or older. The average household size was 2.32 and the average family size was 2.92.

The Meade County Public Library is a tax-supported institution, begun in 1955 and relocated to a new facility in 2011. The library held the Brandenburg stone from the 1960s until 1996, and has again held the stone since 2012.

Attractions near Brandenburg include:

All content from Kiddle encyclopedia articles (including the article images and facts) can be freely used under Attribution-ShareAlike license, unless stated otherwise. Cite this article:
Brandenburg, Kentucky Facts for Kids. Kiddle Encyclopedia.