Meade County is a county located in the U.S. state of Kentucky. As of the 2010 census, the population was 28,602. Its county seat is Brandenburg. The county was founded December 17, 1823, and named for Captain James M. Meade, who was killed in action at the Battle of River Raisin during the War of 1812. 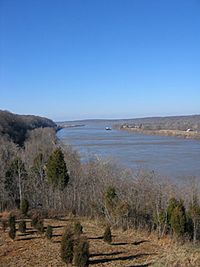 View of the Ohio River in Meade County

The Regional planning group One Knox considers the largest road projects needed to support the growth from the BRAC realignment at Fort Knox to include extending Kentucky Route 313 to US 60 in Meade County and then into Brandenburg creating a corridor between Radcliff and Elizabethtown running parallel to U.S. Route 31W (Dixie Highway), and building a new extension from Bullion Boulevard in Fort Knox to KY 313 in Radcliff. The group estimates that buying the right of way for the KY 313 project to Brandenburg would cost nearly $30 million. The realignment at Fort Knox is projected to bring thousands of workers and jobs, along with millions of dollars into the regions economy.

All content from Kiddle encyclopedia articles (including the article images and facts) can be freely used under Attribution-ShareAlike license, unless stated otherwise. Cite this article:
Meade County, Kentucky Facts for Kids. Kiddle Encyclopedia.