A specimen was presented to the Linnean Society of London by John Gould in 1840, and published in the society's journal the following year. The date of first publication has been the source of conjecture, and it has been proposed that this was in a 1840 issue of The Athenaeum.

Gould obtained his specimens while in Australia, returning these to England for scientific examination; he gave the animal the common name bridled kangaroo. 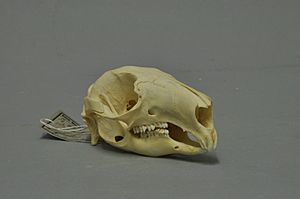 Skull of a bridled nail-tail wallaby

The bridled nail-tail wallaby can grow to one metre in length, half of which is tail, and weighs 4–8 kg. Females are somewhat smaller than the males. The tail spur can be 3–6 mm long and partly covered in hair. Its purpose is unclear.

The taste of the meat of this species has been described as excellent.

Map showing past and present distribution of the bridled nailtail wallaby

At the time of European settlement of Australia, bridled nail-tail wallabies were common all along the East Australian coastline region to the west of the Great Dividing Range. Naturalists in the 19th century reported that the species ranged from the Murray River region of Victoria through central New South Wales to Charters Towers in Queensland.

The species declined in the late 19th and early 20th centuries with no confirmed sightings between 1937 and 1973, by which time it was believed to be extinct. After reading an article in a magazine about Australia's extinct species, a fencing contractor reported that there was an extant population on a property near Dingo, Queensland. This sighting was subsequently confirmed by researchers from the Queensland Parks and Wildlife Service, and the property eventually became Taunton National Park, a scientific nature reserve for the purpose of ensuring the ongoing survival and protection of this endangered species. The current range of this wallaby is less than 5% of its original range. 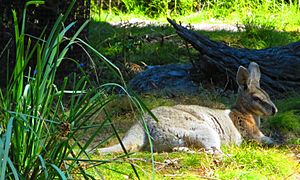 The species are most active during the night-time and dusk periods. Day is usually spent sleeping in hollows near bushes or trees. In modern habitats, nail-tails keep close to the edges of pasture grasses. These wallabies have a reputation as shy and solitary animals. They may occasionally form small groups of up to four to feed together when grazing is in short supply. The bridled nail-tail wallaby likes to avoid confrontation and has two main ways of avoiding threats – hiding in hollow logs and crawling under low shrubs. If caught in the open, it may try to lie completely still hoping not to be observed.

Gould was able to view the animal in its native habitat and recorded observations of its behaviour at the area around Brezi and then to observe their capture by the indigenous people at "Gundermein" on around the lower Namoi River. His notes the rapid movement of a live animal when pursued, outpacing the dogs accompanying his party, which ascended up a hollow tree and leapt from the top to enter a hollow log. At a second site Gould witnessed the capture of the species with nets by the local people, fulfilling his request for a series of specimens.

After a gestation period of about 23 days, the single joey undergoes further development in the mother's pouch for around four more months.

The bridled nail-tail wallaby is of interest to marsupial researchers because it appears to have a more vigorous immune system than other species of macropods. In the words of Central Queensland University based marsupial immunologist Lauren Young, "These wallabies appear to be able to survive parasite infections, viruses and various diseases more readily than other marsupials". 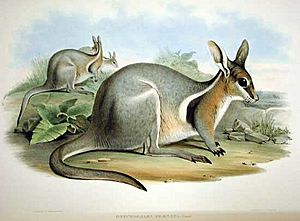 Lithograph of Onychogalea fraenata from second volume of The Mammals of Australia by John Gould, 1863

Since its rediscovery, the bridled nail-tail wallaby has been the target of private conservation efforts to re-establish viable populations. Captive breeding programs have allowed the establishment of three populations; two in State reserves located at Idalia and Taunton National Parks, and another on a private reserve, Project Kial, located near Marlborough in Central Queensland. The Idalia re-introduction was ultimately a failure, and the species is now refined to three populations: Taunton National Park, Avocet Nature Refuge, and Scotia Sanctuary. The extant population is currently estimated to be less than 500 mature individuals in the wild.

In the early 1900s this species suffered dramatically from shooting, for its fur and because it was considered a pest. Current threats to the species include predation by introduced species such as feral cats, red foxes, and dingoes. Other threats include wildfires, prolonged drought, habitat destruction by the pastoral industry and competition for food from grazers, such as rabbits and domestic sheep.

All content from Kiddle encyclopedia articles (including the article images and facts) can be freely used under Attribution-ShareAlike license, unless stated otherwise. Cite this article:
Bridled nail-tail wallaby Facts for Kids. Kiddle Encyclopedia.