Brislington East is a council ward of the city of Bristol, in the United Kingdom.

The ward covers the eastern part of Brislington and the areas of Bristol known as Broomhill and St Annes Park. 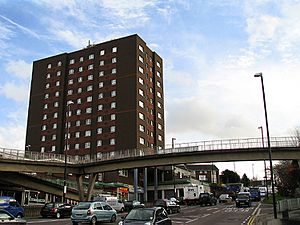 The A4 Brislington Hill on the boundary between East and West Brislington.

Brislington is one of the larger areas of Bristol, hence the need for it to be split into two sections for the purposes of local government. The home ground of Brislington F.C. lies in Brislington East, as does St. Brendan's Sixth Form College. It also has a McDonald's restaurant, and a 6-acre (24,000 m2) large nature reserve, called Eastwood farm, as well as a Co-op, and The Good Intent pub.

Broomhill, sometimes spelled Broom Hill, is an area in Bristol to the north of Brislington. The area is adjacent to the River Avon and crossed by the Great Western Railway, and some sidings, just east of Temple Meads Station. The railway passes through a tunnel which was built by Isambard Kingdom Brunel in 1840 which is a listed building. It is served by bus service 1.

Broomhill Junior School is a coeducational junior school, situated on Allison Road, that educates in years 3–6. The headteacher is Colin Thompson.

St Annes Park is a housing estate that lies to the north of Broomhill and to the east of St Annes, and is bounded to the north and east by the River Avon.

All content from Kiddle encyclopedia articles (including the article images and facts) can be freely used under Attribution-ShareAlike license, unless stated otherwise. Cite this article:
Brislington East (ward) Facts for Kids. Kiddle Encyclopedia.