Bromheadia finlaysoniana, commonly known as the pale reed orchid and as Bromheadia pulchra in Australia, is a plant in the orchid family and is native to areas from Indochina to northern Australia. It is a terrestrial orchid with a tough upright, stem and stiffly spreading, elliptic to egg-shaped leaves. There is a long flowering stem with a short zig-zag section near the end where single flowers open in succession. The flowers are white with a yellow labellum. 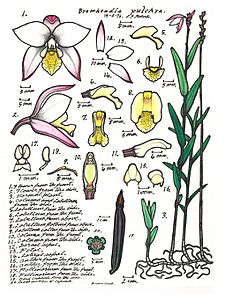 Drawing of Bromheadia finlaysoniana (as B. palustris) drawn by Lewis Roberts

The pale reed orchid was first formally described in 1833 by John Lindley who gave it the name Grammatophyllum finlaysonianum and published the description in his book The genera and species of Orchidaceous plants. In 1859, Friedrich Miquel changed the name to Bromheadia Finlaysoniana. The specific epithet (finlaysoniana) honours George Finlayson who collected the type specimen.

Bromheadia finlaysoniana has a wide distribution that includes Myanmar, Thailand, Cambodia, Laos, Vietnam, the Malay Peninsula, Singapore, Sumatra, Borneo, Brunei, the Moluccas, New Guinea, the Cape York Peninsula in Queensland, the Anambas Islands and possibly the Philippines, although it's uncertain whether the specimens referred to the Philippines were actually collected there. It grows in wet areas, usually near streams, 0–200 metres altitude. In Queensland, B. finlaysoniana grows from the top of the Cape York Peninsula in the north to Hopevale in the south.

A cDNA for the enzyme dihydroflavonol 4-reductase has been cloned from B. finlaysoniana.

All content from Kiddle encyclopedia articles (including the article images and facts) can be freely used under Attribution-ShareAlike license, unless stated otherwise. Cite this article:
Bromheadia finlaysoniana Facts for Kids. Kiddle Encyclopedia.