The Brook Waimārama Sanctuary is a nearly 700 hectare mainland "ecological island" sanctuary located 6 km south of Nelson, New Zealand. The Brook Waimārama Sanctuary Trust was established in 2004 with the intent of restoring the flora and fauna of the Brook Valley, a former water supply for Nelson with intact beech forest. A predator-proof fence was completed in 2016, introduced mammalian pests were poisoned in a controversial operation in 2017, and the sanctuary reopened to the public in 2018. Reintroductions of species such as the Okarito kiwi and saddleback are planned. 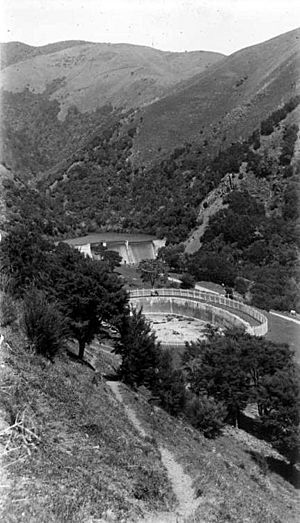 The Brook Valley immediately south of Nelson is a water-supply reserve owned for over 100 years by the Nelson City Council. The Nelson Waterworks Reserve was created in 1865, encompassing the watershed of the Brook Stream. A dam was built and an oval reservoir were constructed that held a two-week water supply for the city; they opened on 16 April 1868. A second dam was built in 1905, and a third in 1909, to create enough water pressure to supply houses in the hills around Nelson. The dams were plagued with leaks, and the city's water needs continued to grow. A dam and pipeline were built on the Roding River in 1941, and the Maitai River was dammed in 1987. Together these rendered the Brook waterworks obsolete, and it was decommissioned in 2000.

The valley also contained the Dun Mountain railway line, New Zealand's first railway, which was a horse-drawn tramway built in the 1860s to service a chromite mine. In the 1890s two coal mines operated nearby.

Planning for turning the Brook Valley into a predator-free wildlife sanctuary began with the formation of a steering committee in mid-2001, and in 2004 the Brook Waimārama Sanctuary Trust was formed as a community group. The valley was only 5 km from Nelson, backed onto 1660 km² Mount Richmond Forest Park, and included the 690 ha Waterworks Reserve. Although its lower reaches had been initially cleared for grazing livestock and were regenerating, the beech forest in the upper reaches had been preserved as a water-supply reserve and was intact. 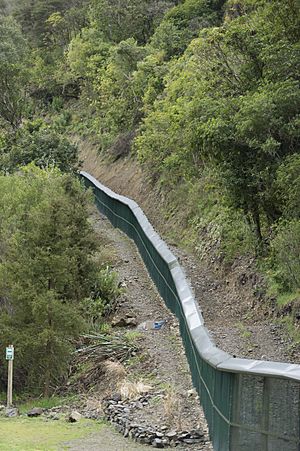 The plan for the Brook Waimārama included a predator-proof fence, to prevent reinvasion by introduced predatory mammals after eradication had been completed. A resource consent for the fence was secured in 2009, and the fence route surveyed in 2010. The area to be protected was three times the size of Zealandia, with a fence twice as long – the largest wildlife sanctuary in the South Island, and the second-largest in New Zealand.

The predator-proof fence was finished in September 2016 after 12 years of planning and 18 months of construction. The fence is 14.4 km long, and cost $4.2 million. In addition to the Nelson City Council and Tasman District Council funding, $574,000 was raised in donations (including a one-off anonymous donation of $250,000), and the remaining $1.75 million came from a Lottery grant. An electric wire runs the length of the fence hood to detect when branches fall on it that might allow a predator to cross. 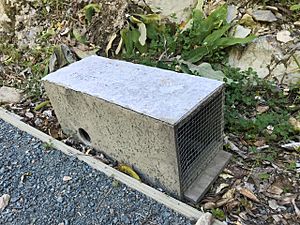 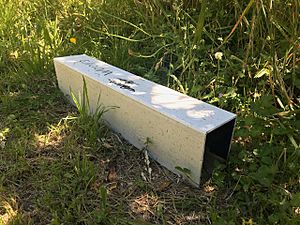 A trapping programme began in a small area of secondary forest in 2006 aimed at controlling possum, rat, mice, stoat and weasel populations. A team of volunteers cut 22 km of tracks spaced 100 m apart around the valley, allowing traps to be set up on a 100 m grid (50 m around the perimeter). The traps were baited weekly. Shooters also killed about 100 goats that had been ring-barking trees in the valley.

Three aerial drops of 26.5 tonnes of brodifacoum-laced bait to eliminate all rodents within the fence were planned for July to October 2017. This action was challenged in June by a group calling themselves the Brook Valley Community Group (BVCG), who protested the aerial poison drop near a waterway. Although portraying themselves as a community group, many of the organisers were anti-1080 activists from outside Nelson. The drop was halted while the case went to the High Court on 7 August, and then, two days before the first drop, to the Court of Appeal; in both cases the court ruled against the BVCG.

The BVCG attempted to take their appeal to the Supreme Court, but were denied, and they were ordered to pay over $70,000 in legal costs to the Nelson City Council, the Minister for the Environment, and the Brook Waimārama Sanctuary Trust. The group considered disbanding as an incorporated society to avoid having to pay the costs and "starting again somewhere else". After attempting to recover some of the $100,000 it had spent responding to the BVCG's legal action, the Nelson City Council applied for the group to be liquidated.

After six months of monitoring, the sanctuary was declared "pest free" in 2018, with at least 14 pest species removed from within the fence, including rats, stoats, and deer. A four-monthly testing regime checks for presence of rodents; as of May 2019 there had been two breaches of the fence, both individual rats which were dealt with shortly afterwards. In the year following the elimination of rodents there was 400 per cent increase in the numbers of tūī and bellbirds, and a 200 per cent increase in fantails and tomtits. There were also notable increases in the number of ground invertebrates and tree seedlings.

The sanctuary reopened to the public on Sunday 15 July 2018. It featured an outdoor classroom space with electricity for visiting school groups, a wheelchair-accessible loop track, and bridges over the former dams. The visitor centre, designed by John Palmer of Palmer & Palmer Architects, had been operating since 2007. A wheelchair-accessible bridge was scheduled to be opened in February 2020, but the Sanctuary was forced to temporarily close due to the high summer fire risk.

From 2004 to 2019 the Brook Waimārama Sanctuary Trust was chaired by Dave Butler, who had been involved with the project from the beginning; he had previously managed the ecological island setup at Lake Rotoiti in Nelson Lakes National Park. The Acting Chair Peter Jamieson was replaced in 2019 by Chris Hawkes.

The first general manager of the Trust was Hudson Dodd, who started in January 2012 and played a major role in the fundraising for the fence and pest removal. Dodd stepped down in November 2018 and was replaced as CEO in January 2019 by Ru Collin.

As part of Nelson City Council's Long Term Plan, the sanctuary received $250,000 for the 2018–2019 financial year, with a further $150,000 each year for the nine remaining years of the Plan. One third of the Sanctuary's annual budget comes from Nelson City Council, the Department of Conservation, and Jasmine Social Investments; the remainder is from sponsorship and donations. After missing out on $50,000 of additional Council funding its annual budget, previously $850,000, dropped to $660,000. In January 2020 the Sanctuary announced that it would be replacing its voluntary entry fee of $5 ($15 for families) with a compulsory fee of $15 for adults, $8 dollars for those under 15 years, and $40 for families. These fees would be halved for Nelson or Tasman residents, students, and unwaged. 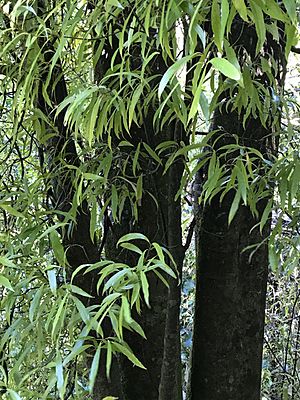 Brook Waimārama Sanctuary contains over 250 species of vascular plants, including pukatea (Laurelia novae-zelandiae) and tawa (Beilschmiedia tawa) which are close to their southern limits here. About two thirds of the valley consists of intact Southern beech forest, including all five beech species, along with mataī, rimu, and tōtara. The remainder in the north-west is a mixture of kānuka, mānuka, and regenerating broadleaf forest. 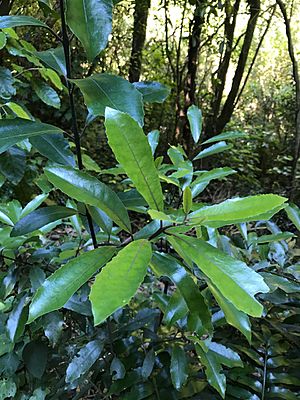 Tūī, bellbirds, fantails, kererū, grey warblers, brown creepers, silvereyes, and tomtits are common in the sanctuary, and South Island robins and riflemen, which had previously lived in the upper reaches, are increasingly venturing into the valley bottom. Some nationally uncommon species are also present, such as New Zealand falcons/kārearea. The Sanctuary's long-term plan is to re-introduce several threatened bird species: 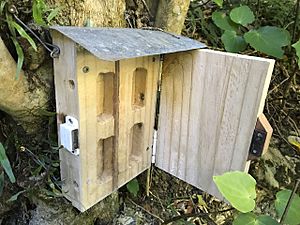 In the stream are freshwater crayfish (kōura) and koaro (Galaxias brevipinnis). Nelson green geckos (Naultinus stellatus) are present, and tuatara are included in the Sanctuary reintroduction plan. Of the invertebrates, huhu beetles and tree wētā are most noticeable, and wētā "hotels" have been installed beside the walking track.

All content from Kiddle encyclopedia articles (including the article images and facts) can be freely used under Attribution-ShareAlike license, unless stated otherwise. Cite this article:
Brook Waimārama Sanctuary Facts for Kids. Kiddle Encyclopedia.