The Brow Monument is a monument listed in the National Register of Historic Places for Coconino County, Arizona, located in the Kaibab National Forest. The site contains one of the few remaining survey markers used by the expedition of John Wesley Powell in 1872 It is accessible via the Brow Monument Trail.

The Brow Monument is listed in the National Register of Historic Places for Coconino County, Arizona. It is located on the "brow" of the North Kaibab Plateau in northern Arizona within the jurisdiction of the Kaibab National Forest. The National Register designation is to memorialize the John Wesley Powell surveying expedition of 1872. The site consists of one of the few remaining triangulation survey markers that were laid down by Powell's party. They were a key component in being able to calculate distances and topography in the early West by using a baseline and these triangulation points. The baseline for this survey was first laid out near the present-day towns of Fredonia, Arizona, and Kanab, Utah, some 30 miles north of the Brow marker. The survey markers were and continue to this day to also be referred to as "monuments", thus the term "Brow Monument" both defines the physical marker and represents a memorial for the expedition.

The surveying expedition commenced in February 1872 from Kanab, Utah and its base was at the Big Springs, Arizona homestead of Levi Stewart, a pioneer farmer. The first marker at what is today Brow Monument was set at this time. The original markers for this and other surveying expeditions were usually a large pyramid of stones, sometimes a blazed tree, a marked rock, or stacked or cribbed logs, with a red-and-white flag high above to facilitate telescope readings from considerable distances. Combined with information from barometric readings which established elevation above sea level, topographic maps could be drawn. The survey was completed in August of that year. In 1878, G. K. Gilbert, a member of the original surveying team, returned to the area to structurally improve the marker by constructing a wooden crib to support it. 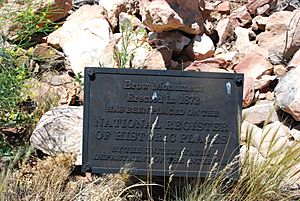 Memorial plaque at the original location

The measurements for the marker were remarkably accurate considering the technology of the time and the rough terrain in which the survey was conducted.

In 1933, a new monument was erected approximately 300 feet uphill from the original site by the U.S. Geological Survey. This new monument is now the official marker to be used in surveying. There is a brass cap survey marker at this new location. The original marker remains undisturbed except for the addition of a memorial plaque.

The historic significance of Brow Monument was officially recognized when it was listed on the National Register of Historic Places on July 13, 1987. 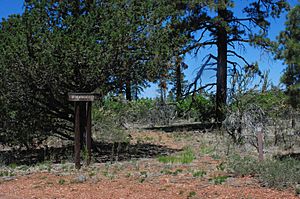 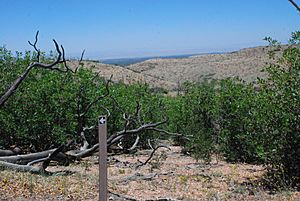 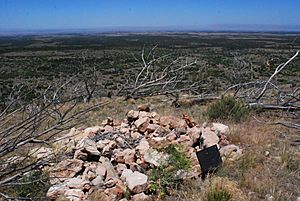 There are a number of National Forest Service signposts along the Brow Monument Trail.

All content from Kiddle encyclopedia articles (including the article images and facts) can be freely used under Attribution-ShareAlike license, unless stated otherwise. Cite this article:
Brow Monument and Brow Monument Trail Facts for Kids. Kiddle Encyclopedia.