Brownsea Castle, also known historically as Branksea Castle, was originally a Device Fort constructed by Henry VIII between 1545 and 1547 to protect Poole Harbour in Dorset, England, from the threat of French attack. Located on Brownsea Island, it comprised a stone blockhouse with a hexagonal gun platform. It was garrisoned by the local town with six soldiers and armed with eight artillery pieces. The castle remained in use after the original invasion scare had passed and was occupied by Parliament during the English Civil War of the 1640s. By the end of the century, however, it had fallen into disuse.

In 1726 the castle was converted into a private residence by William Benson, despite complaints from the town of Poole. Benson and the subsequent owners extended the original blockhouse to form a country house, landscaping the surrounding island to create ornamental gardens and lakes. The 19th century saw continued building work by the castle's occupants, including the entrepreneur Colonel William Waugh, who erected various Jacobethan-styled extensions. A serious fire in 1896 gutted the castle, which was restored by Major Kenneth Robert Balfour. The wealthy stockbroker Charles Van Raalte led a lavish lifestyle at Brownsea at the start of the 20th century, using it to house his collection of antique musical instruments.

Brownsea Castle was purchased by Mary Bonham-Christie in 1927. She allowed the property to fall into disrepair and by the time of her death in 1961 it was in a very poor condition. It was then purchased by the National Trust and leased to the John Lewis Partnership, who restored it over many years. In the 21st century it is still used by the Partnership as a corporate hotel for their employees and retired staff.

Brownsea Castle was built as a consequence of international tensions between England, France and the Holy Roman Empire in the final years of the reign of King Henry VIII. Traditionally the Crown had left coastal defences to the local lords and communities, only taking a small role in building and maintaining fortifications, and while France and the Empire remained in conflict with one another, maritime raids were common but an actual invasion of England seemed unlikely. Modest defences, based around simple blockhouses and towers, existed in the south-west and along the Sussex coast, with a few more impressive works in the north of England, but in general the fortifications were very limited in scale. 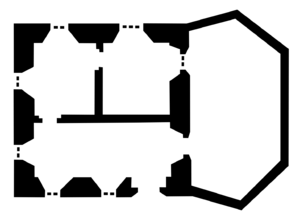 Plan of the 16th-century blockhouse

In 1533, Henry then broke with Pope Paul III in order to annul the long-standing marriage to his wife, Catherine of Aragon and remarry. This resulted in France and the Empire declaring an alliance against Henry in 1538, and the Pope encouraging the two countries to attack England. Henry responded in 1539 by ordering, through an instruction called a "device", the construction of fortifications along the most vulnerable parts of the coast. The immediate threat passed, but resurfaced in 1544, with France threatening an invasion across the Channel, backed by her allies in Scotland. Henry therefore issued another device in 1544 to further improve the country's defences, particularly along the south coast.

The castle was built on the south-east corner of Brownsea Island between 1545 and 1547 to protect the entrance of the busy Poole Harbour. The island belonged to the Crown, having been confiscated from Cerne Abbey during the Dissolution of the Monasteries a few years before. It was a conservative design, being a one-storey, square blockhouse, reported in 1552 to be 44 feet (13 m) across, able to support guns on its roof and sub-divided into three rooms; the blockhouse was originally intended to have been two storeys in height, but this was not achieved. The blockhouse was surrounded on the seaward side by a hexagonal gun platform, with a moat around the other three sides and a 24-foot-long (7.3 m) drawbridge on the south-west side to allow access.

The construction was paid for by a combination of the Crown and the local town of Poole, who took on the responsibility of garrisoning and maintaining it; in the early years of Elizabeth's reign, the normal garrison was described as comprising six men and was equipped with eight artillery pieces.

Additional work on the gun platform costing £56 was carried out in 1548, and further work was carried out in 1552 to develop the castle's defences, at the cost to Poole of £133. The castle needed regular investment: 101 piles were driven in during 1551, probably to combat coastal erosion, and in 1561 the town petitioned the Crown for help with further repairs and the provision of new cannons. Another petition was made for similar help in 1571, resulting in repairs two years later costing £520 and requiring 4,000 tonnes (3,900 long tons; 4,400 short tons) of stone. More work followed in 1585, including building an additional 4-foot-high (1.2 m) wall around the castle.

In 1576, Elizabeth I granted the castles of Brownsea and Corfe for life to Sir Christopher Hatton, making him the Admiral of Purbeck. Hatton argued with the town of Poole, claiming that he had the right to search and inspect ships going into Poole Harbour, as well as the rights to the revenues from the local ferry service; he lost his legal case around the ferrying rights in 1581. In 1589, the Bountiful Gift refused to pull in for inspection, arguing that it had had a valid pass to leave, and Brownsea Castle fired on the vessel, killing two of the crew. The castle's captain, Walter Partridge, was tried and conflicted of manslaughter, but ultimately pardoned. The rest of the island, but not the castle, was leased out to various landowners over the next few years. 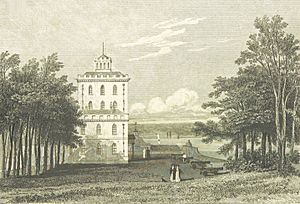 1818 view of the castle, showing the Palladian development of the original blockhouse by Sir Humphrey Sturt

The castle was garrisoned throughout most of the 17th century. In the civil war of the 1640s between the supporters of Charles I and Parliament, the castle was held for Parliament, under the control of the Governor of Poole. The castle was refortified and in 1644, Parliament ordered that four pieces of artillery and four chests of muskets be sent to the castle, which by 1646 had a garrison of 20 men. During the Interregnum, the wealthy merchant Sir Robert Clayton bought the surrounding island. Clayton probably did not live in the castle, however, and it fell into disrepair; by the end of the century the town of Poole refused to garrison the decaying defences.

The amateur architect William Benson bought the island from Clayton's heirs in 1726 for £300. Benson set about converting the castle into a private residence, amid complaints from the authorities in Poole. The town took the matter to the Attorney General, where they argued that Benson had not bought the rights to the castle itself, only the island, and that the castle was a national fortification, originally built by Henry VIII and owned by Poole. Benson argued that the building had not originally been a castle but rather a lodging house; it had not been built by Henry and therefore the Crown had no particular rights over it - rather, the previous owners of the island had simply allowed the town and the government to place artillery there. The matter was eventually dropped and Benson demolished the external fortifications, created a Great Hall and planted trees and rare plants around the island.

The castle was sold to a Mr Chamberlayne and then onto Sir Gerard Sturt in 1762 and Gerard's cousin, Sir Humphrey Sturt, in 1765. Humphrey extended the castle around its 16th century core to form a Palladian styled, four-storey tower with battlements, with new wings stretching away on three sides. He also built a walled courtyard with hot houses beside the castle, and landscaped the island with two lakes and a large number of fir trees at a cost of £50,000. His son, Charles Sturt, made the castle his primary home, although he was often living elsewhere as a result of his involvement in the Napoleonic Wars. 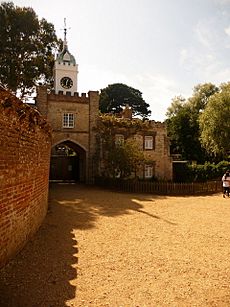 The gatehouse and clocktower, built in 1852

Charles Sturt's son, also called Charles, inherited the property and sold it to Sir Charles Chad in 1817. Chad invested significantly in the castle and Prince George visited in 1818, arriving to a salute from the castle guns. The diplomat Sir Augustus Foster acquired the castle in 1840 on his retirement; he killed himself at the castle 1848, having been in what his inquest termed a state of temporary insanity following a "disease of the heart and lungs".

A retired Indian Amy officer, Colonel William Waugh, bought the island in 1852, hoping to turn it into a profitable pottery works. He carried out restoration work on the castle and built up a new Jacobethan-styled range around the south and east sides of the castle. Waugh also constructed the crenelated gatehouse and clocktower at the entrance to the courtyard, and the Jacobethan-styled family pier by the sea below the castle. The commercial venture was a failure and Waugh fled his creditors to Spain in 1857.

The castle caught fire on 26 January 1896 and the interiors were gutted by the blaze. Balfour rebuilt the property with the services of the architect Philip Brown, softening the more complex aspects of the castle's design. Balfour's wife, Margaret Anne, fell ill and he decided to sell the island in 1901 to the stockbroker Charles van Raalte. 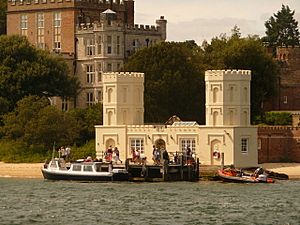 The Family Pier, also dating from 1852

Van Raalte maintained a lavish lifestyle at the castle, which by now had 38 bedrooms, holding grand house-parties during the summer months, complete with servants and a part-time musical band and assembling a rare collection of around 250 historical musical instruments from Europe, Asia and Africa at the castle. Charles died in 1908 but his wife Florence stayed until 1925. On Florence's death in 1927 the castle was sold to Sir Arthur Wheeler, who promptly decided to auction off the remaining contents with the intent of demolishing the property. The sale, which included some of Van Raalte's collection of instruments, paintings and a 5,000 book library, produced £22,300.

The castle was not demolished as planned and instead was purchased by Mary Bonham-Christie for £125,000 later that year. She decided to live in a nearby house rather than the castle itself, allowing the island to return to nature and the castle to fall into disrepair. By the time of Bonham-Christie's death in 1961 the roof had partially collapsed and a tree was growing up through the centre of the building. Facing large death duties, Bonham-Christie's grandson put the island up for sale, before agreeing to donate it to the state in lieu of taxes.

The National Trust took on ownership of the castle and island in 1962 but considered the castle to be of "little antiquity or architectural interest". The John Lewis Partnership leased the castle from the Trust for use as a corporate hotel by their employees, gradually restoring the buildings in stages and they remain the current tenants. Some of the 19th century interior features still survive, including wood panelling and ornamental ceilings, with some carved stone fireplaces from Venice; the castle also has four cannons, probably dating from the 17th or early 18th century. The castle is protected under UK law as a Grade II listed building.

All content from Kiddle encyclopedia articles (including the article images and facts) can be freely used under Attribution-ShareAlike license, unless stated otherwise. Cite this article:
Brownsea Castle Facts for Kids. Kiddle Encyclopedia.