Broxburn (Scottish Gaelic: Srath Bhroc) is a town in West Lothian, Scotland located 12 miles (19 km) west of Edinburgh on the A8 road, 5 mi (8 km) from Edinburgh Airport, and to the north of Livingston.

As a commuter town serving the M8 corridor into Edinburgh and the industrial areas of Livingston, Broxburn has seen a recent increase in immigration, especially from Poland.

The name Broxburn is a corruption of "brock's burn", brock being an old name for a badger and burn being a Scots word for a stream. The village was earlier known as Easter Strathbrock (Uphall was Wester Strathbrock). 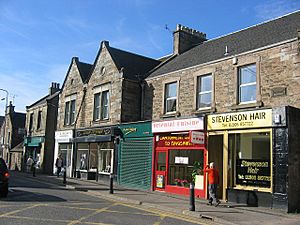 The village that later became Broxburn probably originated around 1350 when Margery le Cheyne inherited the eastern half of the Barony of Strathbrock (Easter Strathbrock) on the death of her father, Sir Reginald le Cheyne III. The hamlet that grew up around her residence was then called Eastertoun (eastern town) after the land on which it stood. The lands of Strathbrock were earlier owned by Freskin the Fleming, granted to him under a charter from King David I.

Eastertoun was burned to the ground sometime in 1443-4 during a conflict between William, Earl of Douglas, Lieutenant-General of Scotland, and William, Lord Crichton, Chancellor of Scotland. It was destroyed again in 1455 during fighting between the Douglases and King James II. After the conflict, peace was regained and the town was gradually resettled.

The village was renamed Broxburn in 1600 by Sir Richard Cockburn of Clerkington, Keeper of the Privy Seal of Scotland, almost certainly after Broxburn, East Lothian.

The Union Canal passes through Broxburn. It no longer operates as a transport link, but is now used for fishing and some leisure boating. It has a towpath previously used by the horses which drew canal barges and which is now used as a footpath.

All content from Kiddle encyclopedia articles (including the article images and facts) can be freely used under Attribution-ShareAlike license, unless stated otherwise. Cite this article:
Broxburn, West Lothian Facts for Kids. Kiddle Encyclopedia.