Brush Mountain is a stratigraphic ridge in the Appalachian Mountains of central Pennsylvania, USA, running east of the Allegheny Front and west of Tussey Mountain. It lies along the southeast side of Little Juniata River and both sides of the Sinking Run, and is the westernmost ridge in its section of the Ridge-and-valley Appalachians. The western ridge line separates the Logan Valley from the Sinking Valley.

Brush Mountain lies entirely in Blair County. It runs from the water gap formed with Bald Eagle Mountain by the Little Juniata River at Tyrone, south to the Sinking Valley anticline fold near Altoona then north to the Canoe Valley syncline fold, where the ridge becomes Canoe Mountain, a distance of approximately 30 miles (44 km).

No major roads or rivers cross the ridge or run through gaps. Kettle Reservoir collects surface runoff from a small area in the fold, and the dam was made by filling in a small ravine. Kettle Road, a secondary road, also runs through the ravine near the dam to the Sinking Valley. A major power transmission line crosses the ridge twice, midway between the folds.

The Brush Mountain Ridge is popular with soaring birds and glider pilots ridge soaring along its slopes. This ridge is part of a chain of ridges that stretch south to Tennessee. The fold at the south end of Brush Mountain forms a gap in the chain, with the continuation of the ridge line 10 km south on Dunning Mountain.

Pennsylvania State Game Lands Number 166 lies on Brush Mountain south of Sinking Hollow and on Canoe Mountain and in the valley between.

Shortly after 11:00 a.m. EST on July 19, 1996, an F1 tornado touched down northeast of Altoona approximately 1 mile northwest of Sickles Corner on Brush Mountain. This tornado moved southeast taking down a swath of trees along the mountain and causing minor damage to homes along a 1.5 mile path before ending one half mile southeast of Sickles Corner. The path width averaged about one half mile wide. This storm was the fourth in the family of tornadoes that had crossed Clarion, Jefferson, Indiana, Clearfield and Cambria counties. 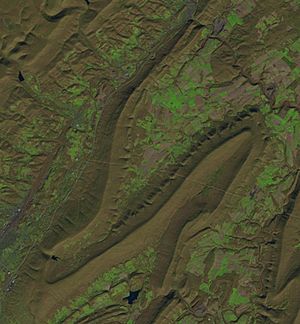 Brush Mountain is in the northern portion of the Ridge and Valley province of the vast Appalachian Mountain Range. Bald Eagle Mountain, and neighboring Tussey Mountain ridge, are made up of Paleozoic rocks, consisting of Ordovician Bald Eagle Formation (sandstone), Juniata Formation (shale and siltstone), and Silurian Tuscarora Formation (Quartzite) that were folded during the Appalachian orogeny in the Permian period, then eroded down to their present form.

The Tuscarora Quartzite is more resistant to erosion than the Bald Eagle Sandstone, and both are more resistant than the Juniata formation between them or the other formations stratigraphically above and below them. The two sandstones thus form a double ridge line with the harder Tuscarora at the crest.

On the north end of the mountain, the rock layers are tipped near vertical, and the mountain has the same double crested ridge shape as the Bald Eagle ridge extending to the north, with the crests near the center of the harder rock layers. A little further south, there are several fault lines running across the ridge, and the rock layers then slope down to the west. This leaves the Tuscarora formation more parallel to the steeper western slope, with the crest marking the dividing line between the layers. The tougher rock also protected the slope from erosion, leaving a higher southern ridge line.

The tilted aspect of the rock layers leaves the Juniata formation more perpendicular to the upper portion of the shallower opposite slope, below the steep crest. The Bald Eagle formation below holds back the eroding rock, creating a shelf above a steeper lower slope running down to the Sinking Valley. The drainage in the shelf area cut a series of small ravines, leaving terraces between them. The terraces wrap around the inside of the anticline fold around the Sinking Valley, and then around the outside of the reverse fold on Canoe Mountain. 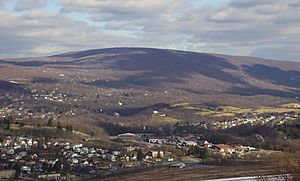 All content from Kiddle encyclopedia articles (including the article images and facts) can be freely used under Attribution-ShareAlike license, unless stated otherwise. Cite this article:
Brush Mountain (Blair County, Pennsylvania) Facts for Kids. Kiddle Encyclopedia.