Bunker Hill is a city in Macoupin County, Illinois, United States. The population was 1,801 at the 2000 census.

The original inhabitants of the Bunker Hill area were the Peoria people, Kickapoo people, and Winnebago people. They were forcibly removed from the area by the United States government around 1830.

As Euro-Americans arrived in Macoupin County, the site of the future Bunker Hill was settled in 1830. At that time, the area was known as Wolf Ridge, due to the presence of wolves in the vicinity. The first settler was Elijah Lincoln in 1830, who established a land claim one and a half miles southwest of present Bunker Hill. Shortly after he made his claim, Lincoln and a Mr. Tuttle laid out a town, named Lincoln after the first settler. The earliest post office in the area was established in 1833 a mile south of Lincoln. A school house was built around 1831, and was also used as the meeting hall for the Baptist denomination. The first church in the area was built by the Baptists. The second was the Congregational Church in nearby Woodburn.

In 1834, County Surveyor Luke Knowlton entered 80 acres (320,000 m2) of land that now cover the center of Bunker Hill. On 25 December 1835, Moses True of Salisbury, New Hampshire, John Tilden of Boston, Massachusetts, and Robert Smith of Alton, Illinois visited Lincoln and formed a company to plat a town and improve the surrounding countryside. By 1836, the settlement of Lincoln had been abandoned, prompting Moses and company to establish a new town, which became Bunker Hill in 1837. 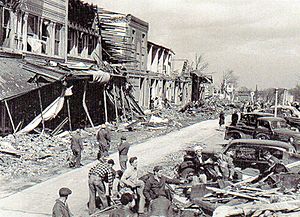 View of the downtown business district after the tornado. 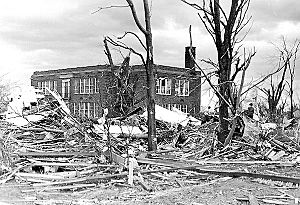 View of Meissner School, one of few surviving buildings.

At 6:45am CST on 19 March 1948, a tornado that originated in Alton, Illinois blew through Bunker Hill, destroying the majority of the town's buildings and killing nineteen people. Although the tornado was only in town for less than a minute, the destruction was devastating. The downtown business district lost many of its buildings. The streets were impassable due to rubble from the storm. The newly renovated Meissner School was one of few buildings virtually undamaged by the tornado. A first aid station was set up in the school, with a temporary morgue in another classroom. By 9:00 am, ambulances from Alton, Carlinville, Litchfield, and Gillespie arrived to transport the injured to local hospitals. By the end of the day, National Guard units, US Army units, the Red Cross, Salvation Army, American Legion, VFW, and Illinois State Police had arrived to restore order and provide assistance to the citizens of Bunker Hill.

The Army and National Guard established patrols to minimize looting, and the State Police set up road blocks to keep sightseers away. The Red Cross, Salvation Army, and Lebanon American Legion opened food stations to feed the volunteers and homeless citizens of the town. Bahn's Grocery Store donated their entire stock for the food stations. A temporary post office was opened in the lobby of the First National Bank. Local farmers brought their tractors and bulldozers to town to clear rubble and reopen the streets.

By evening, the Red Cross had pitched tents in front of Meissner School to house the newly homeless citizens. 126 people were injured and 19 killed by the tornado. Property damage was estimated between four and five million dollars. All five churches in Bunker Hill were destroyed by the tornado, prompting two local ministers, Rev. Burke of the First Congregational Church and Rev. Johnson of the Baptist Church, to conduct the Easter Sunday services on 28 March 1948 using a bulldozer as a pulpit. An estimated 500 residents and volunteers gathered at the center of town for the sermons before returning to work.

A brick pavilion stood in the middle of the intersection of Washington and Warren Streets prior to the tornado. The pavilion, which had been used as a bandstand for community events, was not rebuilt after the tornado, instead being replaced by a flagpole and memorial to local military veterans.

Bunker Hill was the home of the Bunker Hill Military Academy toward the end of the 19th, and beginning of the 20th centuries. The school opened in 1859 as the Bunker Hill Academy, but closed during the American Civil War. From 1862 until 1869, the building housed Bunker Hill's public school. In 1883, the military academy was established in the aging building, offering strict instruction to local children as well as the cadets. The Academy remained open until 1914. After the 1948 tornado, the grounds were donated to the American Legion, which built a local post and park on the site. 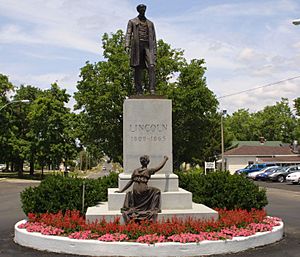 The Lincoln Statue in Bunker Hill

Bunker Hill is the home of one of four statues of Abraham Lincoln sculpted by William Grandville Hastings. In 1904, Captain Charles Clinton, formerly of Company B of the First Missouri Voluntary Cavalry, donated the statue to the citizens of Bunker Hill in commemoration of the service of local veterans in Company B during the Civil War. The cost of the granite base was raised through voluntary subscription, and the bronze casting of Lincoln was shipped from Philadelphia.

A plaque mounted on the statue's base reads:

1904– In Ever Lasting Memory of The Conflict By Which The Union In Which They Took Part This Statue of Abraham Lincoln Was Presented To the Citizens of Bunker Hill By the Soldiers of Company B of the First Missouri Cavalry, Charles Clinton

The statue also includes Lady Liberty kneeling at the base, etching the words "with malice toward none."

The Lincoln Statue rests in the middle of the intersection of North Washington (IL Route 159) and Fayette Streets.

The Bunker Hill City Cemetery, located in the 600 block of East Warren Street, is home to the Soldiers Monument honoring those who fought and died for freedom and liberty. The Monument was erected in 1866. It was damaged during the 1948 tornado but in 1951 three WWII veterans, teamed up to repair it. A special re-dedication ceremony was held on Saturday, 17 September 2016 as part of the 2016 Fall Fest sponsored by the Bunker Hill Chamber of Commerce.

Brittany Shooting Park is located north-northeast of town on East Prairie Dell Road which is about 4 miles north of Bunker Hill off IL 159. The Shoot Park hosts several Illinois State trap meets every year, and offers daily shooting as well as programs for children wanting to learn the sport.

There were 697 households out of which 35.6% had children under the age of 18 living with them, 55.8% were married couples living together, 12.1% had a female householder with no husband present, and 28.8% were non-families. 26.1% of all households were made up of individuals and 14.1% had someone living alone who was 65 years of age or older. The average household size was 2.52 and the average family size was 3.02.

All content from Kiddle encyclopedia articles (including the article images and facts) can be freely used under Attribution-ShareAlike license, unless stated otherwise. Cite this article:
Bunker Hill, Illinois Facts for Kids. Kiddle Encyclopedia.