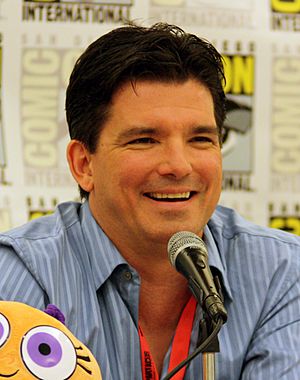 Hartman was born in Highland Park, Michigan to Elmer Earl Hartman III and Carol Davis. He received the nickname "Butch" as a youth and continues to use the name professionally as an adult. Hartman spent his childhood in Roseville, Michigan and his teen years in New Baltimore, Michigan.

He graduated from Anchor Bay High School in New Baltimore in 1983. He subsequently attended the California Institute of the Arts in Valencia, California.

While still attending the California Institute of the Arts, Hartman received the chance to intern as an in-between animator on the Don Bluth film, "An American Tail". Shortly after graduating for the California Institute of the Arts Hartman was hired as a character designer for the animated series "My Little Pony". Instead, they had him working on storyboards (which he had not done before) and as quickly as he was hired, he was fired.

Soon after Hartman found work with Ruby Slash, where he worked on "Adventures of Sonic the Hedgehog", "Captain N: The Game Master" and "Gadget Boy & Heather".

He was also a video reference crew for the Disney movie Pocahontas.Later,he became a writer,television director and storyboard artist for several Hanna-Barbera shows, including Dexter's Laboratory, Cow and Chicken, and Johnny Bravo.

After his contract with Hanna-Barbera finished up he went to work with former co-worker Fred Seibert on Oh,Yeah!Cartoons.

The Fairly OddParents and Danny Phantom

His biggest success came in 1997, when he created The Fairly OddParents. (The idea came to him during the drive from Hanna-Barbera to Nickelodeon to pitch an idea to Fred Seibert.) It was originally a series of made for TV shorts on the anthology show,Oh Yeah!Cartoons. In 2001, Nickelodeon picked it up as a full series. The Fairly OddParents became a huge hit, second only in the ratings to SpongeBob SquarePants. Due to the success of "OddParents", Hartman was asked to create another cartoon for Nickelodeon, (Hartman says the President of Nickelodeon asked him if he had an idea, and before he could say the title he was given a contract.) Danny Phantom, in 2004. The Fairly OddParents ceased production in 2006, but it was announced on Hartman's website on February 2, 2007 that 20 more episodes will be produced. On July 11, 2007, The first new episode of Danny Phantom was aired on the Nicktoons Network. Danny Phantom ended production on August 24, 2007. The 7th Season of The Fairly OddParents aired on February 18, 2008, starting with the 1-hour special Fairly Odd Baby.

Hartman was asked to serve as executive producer and screenwriter of Doogal, the Americanized dub of the British/French animated film The Magic Roundabout. Butch Hartman revealed in an 2017 interview during the Weinstein scandal that the film was originally supposed to include a live-action frame story similar to The Princess Bride but it was scrapped due to budget costs and therefore replaced with Judi Dench's narration. Hartman even revealed that the original U.S. movie poster had his name and his production company Billionfold Inc. on it, until they were removed in later posters in copyright favor of both Pathé and Action Synthese's credits. He later expressed long-harbored remorse for his involvement where he revealed that most of his actual script was actually rewritten without his consent by producer Harvey Weinstein and his distribution and production company The Weinstein Company with a screenplay by Hoodwinked! co-director Cory Edwards; he also claimed that only 3% of his original script made it into the final film.

The film was then dubbed by The Weinstein Company, and was released on February 24, 2006. However, Doogal was poorly received by critics, and did poorly in the box-office, grossing only $7 million and getting 7% on Rotten Tomatoes.[1]

Other and future works

Hartman is currently working on two new projects for Nickelodeon: one, a live-action series and the other, animated. It has also been stated that 20 more episodes of The Fairly OddParents are currently under production and if possible, he may decide to go ahead and work on a theatrical feature film The Fairly OddParents Movie as well. He also has a brand new cartoon series 'T.U.F.F. PUPPY' set to premiere on Nickelodeon in October, 2010. Hartman is the creator and it stars Jerry Trainor as the voice of the lead character, DUDLEY PUPPY. His other TV work include voice actor|voicing various characters on the animated series Family Guy (the series' creator Seth MacFarlane even named the wacky family doctor Hartman after him), and playing the character Sean Masters on the short-lived series Generations in 1991. He was also a recurring character on the popular NBC soap opera Days of Our Lives (1988 - 1989; see [2]).

Hartman currently lives in Bell Canyon, California, with his wife, Julieann, and daughters, Carly and Sophia.

FOP looks of other Nicktoons and Shows

On an edition of Nick Magazine, Butch Hartman posted FOP looks of Nicktoons and other Nick Shows such as Zoey 101, SpongeBob SquarePants, Rugrats, Drake & Josh,and Avatar: The Last Airbender.

All content from Kiddle encyclopedia articles (including the article images and facts) can be freely used under Attribution-ShareAlike license, unless stated otherwise. Cite this article:
Butch Hartman Facts for Kids. Kiddle Encyclopedia.