Buttermilk Creek is a tributary of the Susquehanna River in Lackawanna County and Wyoming County, in Pennsylvania, in the United States. It is approximately 6.8 miles (10.9 km) long and flows through Newton Township in Lackawanna County and Falls Township in Wyoming County. The watershed of the creek has an area of 26.1 square miles (68 km2). The creek is a perennial stream and is not designated as an impaired waterbody. Major geographical features in its watershed include the Buttermilk Falls in its lower reaches, as well as Fords Lake and Lake Winola.

A number of bridges have been constructed over Buttermilk Creek. There is also some development in the watershed. In the early 1900s, the major industries in the watershed were agriculture and a summer resort. The creek's drainage basin is designated as a Coldwater Fishery and a Migratory Fishery. Hemlock trees inhabit its vicinity. Buttermilk Creek has two named tributaries: Falls Creek and Beaver Creek. 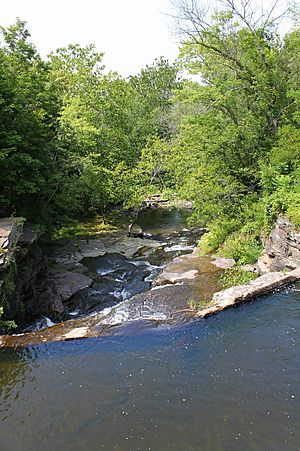 Buttermilk Creek is not designated as an impaired waterbody. Along with Gardner Creek, it is one of only two perennial streams in the Ransom quadrangle.

The topography of the watershed of Buttermilk Creek was described as "rough and hilly" in the Water Resources Inventory Report in 1921. The creek's valley is surrounded by steep hills that have been rounded by glaciation. The creek's channel is sinuous and flows through rock formations consisting of sandstone.

In the distant past, accumulating piles of glacial drift caused Buttermilk Creek to alter its course and flow over a series of cliffs as a waterfall. The total height of the cliffs is 155 feet (47 m) and they consist of sandstone of the Catskill Formation. The falls, which are known as Buttermilk Falls, are a series of low waterfalls that are an "excellent example of the type" and "the most outstanding example of this kind of waterfall system in Pennsylvania". Each individual waterfall ranges in height from 10 to 35 feet (3.0 to 10.7 m). The falls are located 0.3 miles (0.48 km) upstream of the creek's mouth. Buttermilk Creek flows through a narrow defile in its lower reaches. In some reaches, the creek flows through bottom lands and swamps in glacial drift.

Above the Buttermilk Falls, Buttermilk Creek flows over glacial drift. The creek is a relatively small stream with headwaters in a mountain lake.

The surficial geology along most of Buttermilk Creek consists of alluvium. However, in the creek's upper reaches, Wisconinan Till makes up all the surficial geology along it. In the lower and middle reaches, there are also small patches of Wisconsinan Outwash, which contains stratified sand and gravel, and Wisconsinan Ice-Contact Stratified Drift, which contains stratified sand and gravel, as well as some boulders. Bedrock also occurs in the surficial geology near the creek's mouth. Additionally, there are a few patches of alluvial fan, peat bogs and other wetlands, lakes, and sandstone and shale pits in the watershed.

The watershed of Buttermilk Creek has an area of 26.1 square miles (68 km2). The creek is entirely within the United States Geological Survey quadrangle of Ransom. Its watershed is mainly in southwestern Lackawanna County and southeastern Wyoming County.

Geary Enterprises has permission to withdraw no more than 99,000 gallons of water per day from Buttermilk Creek. This company is a sand and gravel company that uses the water for drilling gas wells.

There are a number of lakes in the watershed of Buttermilk Creek. Major ones include Fords Lake on Buttermilk Creek itself and Lake Winola, which has an area of approximately 190 acres (77 ha), on one of its tributaries. A 140-acre (57 ha) reservoir on the creek 0.25 miles (0.40 km) upstream of its mouth was proposed in the 1970s. It could have ultimately provided 109,000 recreation days per year.

In the early 1900s, the main industries in the watershed of Buttermilk Creek included agriculture and a summer resort. Major settlements in the watershed at this time included Mill City, Falls, and Lake Winola. Their populations were 415, 155, and 60, respectively.

The drainage basin of Buttermilk Creek is designated as a Coldwater Fishery and a Migratory Fishery. Hemlock trees occur along the creek in its lower reaches.

Buttermilk Falls on Buttermilk Creek are listed as a locally significant area on the Wyoming County Natural Areas Inventory.

All content from Kiddle encyclopedia articles (including the article images and facts) can be freely used under Attribution-ShareAlike license, unless stated otherwise. Cite this article:
Buttermilk Creek (Susquehanna River tributary) Facts for Kids. Kiddle Encyclopedia.