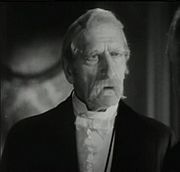 Smith was born on July 21, 1863 in London, England. He studied at the Charterhouse School and at St John's College, Cambridge. Smith was married to Isabella Wood from 1896 until his death in 1948. They had one child.

Smith died on December 20, 1948 in his home in Beverly Hills, California from pneumonia, aged 85. He was cremated. He was buried at St Leonard's Churchyard in Hove, East Sussex.

All content from Kiddle encyclopedia articles (including the article images and facts) can be freely used under Attribution-ShareAlike license, unless stated otherwise. Cite this article:
C. Aubrey Smith Facts for Kids. Kiddle Encyclopedia.