Cadborosaurus, nicknamed Caddy, is a sea serpent in the folklore of regions of the Pacific Coast of North America. Its name is derived from Cadboro Bay in Greater Victoria, British Columbia, and the Greek root word "saurus" meaning lizard or reptile. 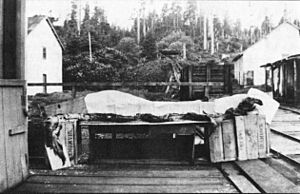 Side view of the Naden Harbour carcass

Cadborosaurus willsi is said by witnesses to resemble a serpent with vertical coils or humps in tandem behind the horse-like head and long neck, with a pair of small elevating front flippers, and either a pair of hind flippers, or a pair of large webbed hind flippers fused to form a large fan-like tail region that provides powerful forward propulsion.

Dr. Paul LeBlond, director of Earth and Ocean Sciences at UBC, and Dr. Edward Blousfield, retired chief zoologist of the Canadian Museum of Nature, state every elongated animal has been put forward as an explanation for Caddy. These animals include Conger eels, humpback whales, elephant seals, ribbon or oarfish, basking sharks, and sea lions. LeBlond and Blousfield state no known creature matches the characteristics found in over 200 sightings collected over a century, noting that Caddy is described as having flippers both anteriorly and posteriorly. Darren Naish contends that LeBlond and Blousfield are engaging in bad science and have incorrectly assumed that different, conflicting eyewitness reports are all descriptions of one species.

In 1943, two police officers, Inspector Robert Owens, and Staff Sergeant Jack Russell, saw a "huge sea serpent with a horse-like head" in Georgia Strait. Later, "with a pair of binoculars, Sgt. Russell saw that the strange apparition was a huge bull sea lion leading a herd of six sea lions... Their undulations as they swam appeared to form a continuous body, with parts showing at intervals as they surfaced and dived. To the naked eye, the sight perfectly impersonated a sea monster."

Some suggestions have been made that Caddy could be an example of the king of herrings or giant oarfish (Regalecus glesne). This species can reach 17 m in length and weigh up to 300 kg. "They're long and silvery and they undulate like a serpent would as they swim through the water," said H.J. Walker, a senior museum scientist at the Scripps Institution of Oceanography, which has several oarfish in its collection.

Michael Woodley, Darren Naish, and Cameron McCormick argue that a baby "Cadborosaurus" captured in 1968 by whaler William Hagelund was really a pipefish.

A native image that fits Caddy's description has been traditionally used throughout Alaska. The image indicates that Caddy or a Caddy-like creature moves north to Vancouver when the waters warm. The Inuit of Alaska has even put the picture on their canoes to keep the creature away. The Cadborosaurus is called hiyitl'iik by the Manhousat people who live on Sydney Inlet, t'chain-ko in Sechelt mythology, and numkse lee kwala by the Comox band of Vancouver Island.

There have been more than 300 claimed sightings during the past 200 years, including Deep Cove in Saanich Inlet, and Island View Beach, both like Cadboro Bay also on the Saanich Peninsula, also British Columbia, and also at San Francisco Bay, California.

In 2009, fisherman Kelly Nash purportedly filmed several minutes of footage featuring ten to fifteen (including young) creatures in Nushagak Bay. In 2011, a very short segment of the footage was shown on the Discovery TV show Hilstranded, where the Hilstrand brothers (from Deadliest Catch) apparently saw Nash's footage and unsuccessfully attempted to find one of the creatures. 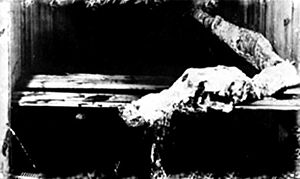 All content from Kiddle encyclopedia articles (including the article images and facts) can be freely used under Attribution-ShareAlike license, unless stated otherwise. Cite this article:
Cadborosaurus Facts for Kids. Kiddle Encyclopedia.