Cadomin is a hamlet in the west-central Alberta, Canada within Yellowhead County. It is located along the McLeod River in the foothills of the Rocky Mountains, approximately 50 kilometres (31 mi) south of Hinton near the Bighorn Highway. It is served by a spur of the Canadian National Railway.

Statistics Canada recognizes Cadomin as a designated place. It is located in census division No. 14 and in the riding of Yellowhead. It is administered by Yellowhead County.

Cadomin's name is an acronym for 'Canadian Dominion Mining', and the town gives its name to the Cadomin Formation, which forms a prominent outcrop near the settlement.

Cadomin is one of many towns in the Alberta Coal Branch area that thrived from the 1920s to the 1950s. During the early 1930s, Cadomin's population peaked at 1,800. Other Coal Branch towns included Mountain Park, Luscar, Mercoal, and farther to the east, Robb, Embarras, Coalspur, Coal Valley, Lovett, and Foothills.

The Cadomin Coal Company began operations in 1917 and four underground mines were eventually developed, as well as a surface mine that operated from 1944 to 1950. The main coal seam, called the No. 1 Seam, averaged 33 feet (10 m) in thicknesses. The strata in the area are strongly folded and faulted, and the seam is strongly inclined to overturned, so a variety of methods were employed to work it. The coal was sold primarily as steam coal for railroad use, and the Cadomin coal mines closed in 1952 due to declining markets as the railroads replaced steam locomotives with diesel. 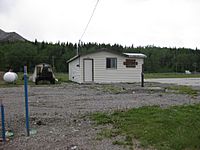 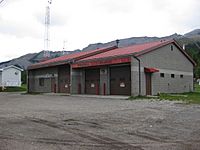 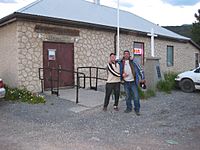 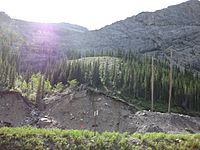 One of the many caves of Cadomin 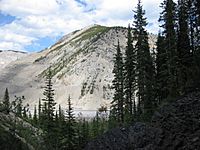 Cadomin Cave, located several kilometres to the south, used to attract a number of tourists during the summer months, although it remains undeveloped. The caves have been closed for the past 5 years or so due to the fungus growth the bats developed.

In the area around Cadomin, there are extensive trails for horse back riding, all terrain vehicles and dirt biking. Mountain biking is becoming increasingly popular as well. Bird watching is a popular hobby and there are also regular butterfly counts every year.

The scientific and naturalist communities spend a great deal of time studying the extensive wildlife including bighorn sheep, grizzly bears, moose, elk, and other mountain species.

All content from Kiddle encyclopedia articles (including the article images and facts) can be freely used under Attribution-ShareAlike license, unless stated otherwise. Cite this article:
Cadomin Facts for Kids. Kiddle Encyclopedia.