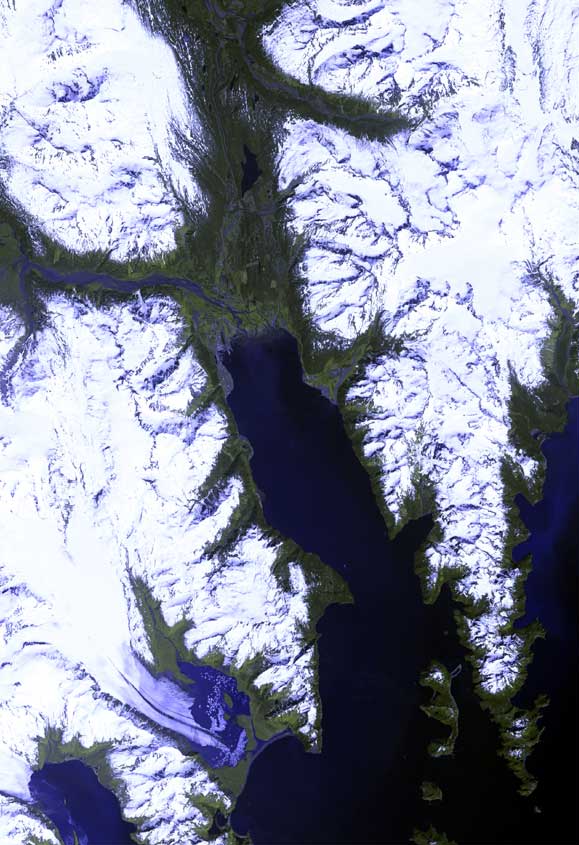 There is no evidence that the area had any previous settlements of Native American population. On August 28, 1903 a wooden steamship Santa Ana operated by Pacific Clipper Steamship Company brought first permanent settlers to Seward, Alaska. The cape was named after Captain E.E. Caine, who was a pioneer of commercial marine transportation between the contiguous United States and Alaska as well as one of the company owners.

During World War II, the strategic importance of Caines Head was recognized early. The cape protrudes deep into Resurrection Bay, compelling vessels entering the bay to double Caines Head prior to reaching the port of Seward. Moreover, the cape features a steep elevation of 1,500 feet (460 m), an extremely rugged shoreline, and a 20-foot (6.1 m) difference between high and low tides, effectively obstructing a marine landing. This advantageous position to lock the entrance into the bay and the port of Seward was occupied by US Army forces in July, 1941, months before the Pearl Harbor Attack.

Seward port was considered critical to the war time logistic, as it was an ice-free port at the south terminus of Alaska Railroad. In 1941, US Army deployed 277 men and four 155-mm guns on Caines Head. In July 1942, several months after the Pearl Harbor Attack and a month after Imperial Japanese Army's invasion of the Aleutian Islands, US Army increased its presence and began the construction of permanent fortifications on Caines Head.

Over 5 miles of roads were also built in the area for military purposes; however, they were never connected with Seward. Instead, docking facilities were constructed in the north end of the road network. Permanent 6-inch batteries were constructed on Caines Head; a radar installation and a submarine loop station were maintained in Resurrection Bay for their support. The installations on Caines Head were christened Fort McGilvray on March 25, 1943.

The defense project was almost completed by February 1944, but US Army and Navy successful advances in the Pacific Theater of World War II have rendered the project irrelevant, and the battery was abandoned on April 7, 1944. The battery was dismantled on March 4, 1947.

In 1971, Caines Head area was designated as Caines Head State Recreation Area with intent to develop outdoor recreation opportunities and to conserve the remains of Fort McGilvray. By 1974, the area was enlarged to 5,961 acres (2,412 ha), and in 1995 additional 610 acres (250 ha) were added to its territory, thus reaching the present area of 6,771 acres (2,740 ha). The rise of tourism into the area began in 1984, with first park rangers appointed to the area in 1985.

The area can be reached on foot or by boat. Caines Head features a network of nature trails, some of which follow the original military roads. The remains of Fort McGilvray include reconstructed logged structures erected in the summer of 1941, remains of the military docks, and the original battery installations. The area offers hiking and fishing opportunities, although the hikers following the trails along the beach are warned to time their activities with regards to the high tides of the area.

All content from Kiddle encyclopedia articles (including the article images and facts) can be freely used under Attribution-ShareAlike license, unless stated otherwise. Cite this article:
Caines Head State Recreation Area Facts for Kids. Kiddle Encyclopedia.