Caldey Abbey is an abbey of the Trappists situated on Caldey Island off the coast of Pembrokeshire, Wales, south of Tenby.

Caldey Island has been known as one of the centres of Cistercian activity since Celtic times and thrived during medieval Europe. However, the current abbey was built in 1910 by Anglican Benedictine monks. At the time of building, the abbey was called "the greatest phenomenon in the Anglican community at the present time". The abbey passed to the Trappist order in 1929. As of 2018, there are about 10 members. They are known for their lavender perfume, shortbread and chocolate production, and opened an online shop in 2001.

A Celtic monastery was founded on the island in the sixth century, and a Benedictine foundation existed from 1136 until the dissolution of the monasteries in 1536. Pyro was the first abbot and Saint Samson was one of the early abbots.

William Done Bushell offered the island to Dom Aelred Carlyle in 1900. An Anglican Benedictine community, led by Carlyle, arrived six years later in 1906, and built the current abbey in the Italian style with assistance from Lord Halifax and others between 1906 and 1910. Initially a row of cottages were built for the people working on the building; hence the abbey was named as "cottage Monastery." The chapel was added in 1910. Three years later the monks were received by the Roman Catholic Church, except for a small Anglican remnant which left Caldey and moved into Abbey House, next to Pershore Abbey, Worcestershire. This was a house which had belonged to Caldey Abbey, but was returned in 1913 to its original, Anglican donor. The Anglican Benedictine community moved on from Pershore to Nashdom Abbey in 1926.

The Catholic Benedictines moved to Prinknash Abbey, Gloucestershire by 1928. The much stricter Trappist Order, who now occupy the abbey, came in 1929 from Scourmont Abbey in Belgium. The monastery was rebuilt in 1940 after a fire.

Perfume, shortbread and chocolate production all provide income for the monks, as well as the sale of prime beef. The monastery opened an internet shop in 2001. Chocolate is also sold under the "Abbot's Kitchen" brand. The monastery used to operate a now-defunct dairy which would sell iced confectionery and cake.

Profuse growth of wild lavender flowers on Caldey Island prompted the monks of the abbey to create scents with new fragrances. They branded the scents and marketed them with the brand name “Caldey Abbey Perfumes.” With booming demand for this brand of scent there was need to import scent oil from outside the island. The scent is now manufactured throughout the year and is partly based on the island's gorse. 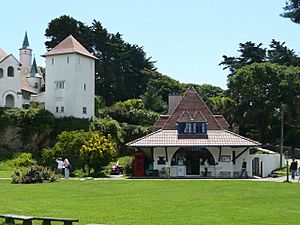 The structure is considered to be the most complete example of the Arts and Crafts style in the country. It was also John Coates Carter's largest project. The roofs are of white roughcast with red tiling, while the large basement arches are of brick. The abbey church has a south tower, with five side-windows, and has a "tapering" tower with primitive crenellations. The windows are simple, with lead glazing. Originally the fittings included silver and ebony altar decorations and other luxurious items, but many were destroyed in the 1940 fire. The refectory of the Abbey was made from fine timber, and although inspired by an ancient pattern, it was modern in design. Two large water tanks underground and a narrow water shaft eliminate the threat of water scarcity in dry seasons.

It is a Grade II* listed building, as is the Abbey Shop, as well as a number of other buildings on the island.

All content from Kiddle encyclopedia articles (including the article images and facts) can be freely used under Attribution-ShareAlike license, unless stated otherwise. Cite this article:
Caldey Abbey Facts for Kids. Kiddle Encyclopedia.