Tenby (Welsh: Dinbych-y-pysgod, meaning fortlet of the fish) is a walled seaside town in Pembrokeshire, West Wales, on the western side of Carmarthen Bay, and the name for the local government community of Tenby.

With its strategic position on the far west coast of the British Isles, and a natural sheltered harbour from both the Atlantic Ocean and the Irish Sea, Tenby was a natural settlement point.

The earliest reference to a settlement at Tenby is in "Etmic Dinbych", a poem probably from the 9th century, preserved in the 14th century Book of Taliesin. At this point the settlement was probably a hill fort, the mercantile nature of the settlement possibly developing under Hiberno-Norse influence.

The blue lines show where the walls round Tenby were most likely placed; the red lines mark the wall sections that are still standing 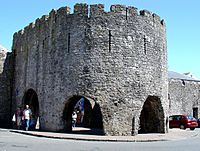 Tenby was taken by the Normans, when they invaded West Wales in the early 12th century. The town's first stone-wall fortification was on Castle Hill. Tenby's mercantile trade grew as it developed as a major seaport in Norman controlled Little England beyond Wales. However, the need for additional defences became paramount after the settlement and castle were successfully attacked and sacked by Welsh forces of Maredudd ap Gruffydd and Rhys ap Gruffydd in 1153. Sacking of the town was repeated in 1187 and again by Llywelyn ap Gruffudd in 1260. After the final attack, William de Valence, 1st Earl of Pembroke ordered the construction of the town's large outer walls in the late 13th century. The stone curtain wall, towers and gates enclosed a large part of the settlement (in what is now known as the "old town"). With the construction of the town walls, Tenby Castle was made obsolete and had been abandoned by the end of the 14th century.

In 1457, Jasper Tudor, the uncle of Henry Tudor, agreed to share with the town's merchants the costs of refurbishing and improving Tenby's defences because of its economic importance to this part of Wales. Work included heightening the wall to include a second tier of higher arrow slits behind a new parapet walk. Additional turret towers were added to the ends of the walls where they abutted the cliff edges, and the dry ditch outside walls was widened to 30 feet (9.1 m).

Consequently, in the Late Middle Ages, Tenby was awarded royal grants to finance the maintenance and improvement of its defences and the enclosure of its harbour. Traders sailed along the coast to Bristol and Ireland and further afield to France, Spain and Portugal. Exports included wool, skins, canvas, coal, iron and oil; while in 1566 Portuguese seamen landed the first oranges in Wales. It was during this period that the town was so busy and important, it was considered to be a national port. During the Wars of the Roses Henry Tudor, the future King Henry VII of England, sheltered at Tenby before sailing into exile in 1471.

In the mid 16th century, the large D-shaped tower known as the "Five Arches" was built following fears of a second Spanish Armada.

Two key events caused the town rapid and permanent decline in importance. First, Tenby declared for Parliament in the English Civil War. After resisting two attempts by the Royalists forces of Charles Gerard, 1st Earl of Macclesfield, it was finally taken in 1648. Ten weeks later the shattered town was surrendered to Colonel Thomas Horton, who welcomed Oliver Cromwell shortly afterwards. Second, a plague outbreak killed half of the town's remaining population in 1650.

With limited infrastructure, resources and people, the town's economy fell into decline. Most of the merchant and business class left, resulting in the town's decay and ruin. By the end of the 18th century, John Wesley noted during his visit how: "Two-thirds of the old town is in ruins or has entirely vanished. Pigs roam among the abandoned houses and Tenby presents a dismal spectacle." 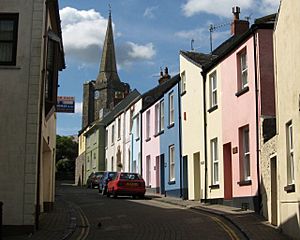 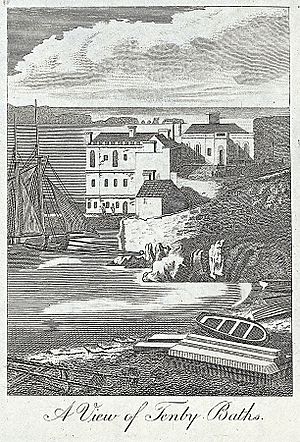 A view of Tenby Baths as depicted in a 1825 illustration

Ironically it was another war that led to a resurgence in Tenby's fortunes. Since 1798, the French General Napoleon Bonaparte had begun conquering Europe restricting the rich British upper classes from making their Grand Tours to continental spa towns. In 1802 local resident, merchant banker and politician, Sir William Paxton, bought his first property in the old town. From this point onwards he invested heavily in the area with the full approval of the town council.

With the growth in saltwater sea-bathing for health purposes, Paxton engaged engineer James Grier and architect Samuel Pepys Cockerell (the same team who had built his home at Middleton Hall) to create a "fashionable bathing establishment suitable for the highest society." His sea-bathing baths came into operation in July 1806 and, after acquiring the Globe Inn, transformed it into "a most lofty, elegant and convenient style" to lodge the more elegant visitors to his baths. Cottages were erected adjoining the baths with adjoining livery stables and coach house. 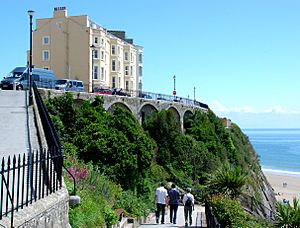 View upwards to the promenade, showing the 1814 arched road built during the town's revival by Sir William Paxton

In 1814 a road built on arches overlooking the harbour was built at Paxton's full expense. He later had a Private Act of Parliament passed that enabled fresh water to be piped through the town. Despite these accomplishments, his 1809 theatre was closed in 1818 due to lack of patronage.

Paxton also took in "tour" developments in the area as required by rich Victorian tourists. This included the discovery of a chalybeate spring in his own park at Middleton Hall, and coaching inns from Swansea to Narberth. He also built Paxton's Tower, in memorial to Lord Nelson whom he had met in 1802 when mayor of Carmarthen. Paxton's efforts to revive the town succeeded, and even when victory at the Battle of Trafalgar reopened Europe, the growth of Victorian Tenby was inevitable.

Through both the Georgian and Victorian eras Tenby was renowned as a health resort and centre for botanical and geological study. With many features of the town being constructed to provide areas for healthy seaside walks, due to the walkways being built to accommodate Victorian nannies pushing prams, many of the beaches today still retain good disabled access. In 1856 writer Mary Ann Evans (pen-name George Eliot) accompanied George Henry Lewes to Tenby to gather materials for his work Seaside Studies published in 1858.

In 1852, the Shipwrecked Fishermen and Mariners' Royal Benevolent Society deployed a lifeboat to the town, taken over in 1854 by the Royal National Lifeboat Institution. This led in 1905 to the building of the first slip-way equipped lifeboat station, which was replaced in 2008. 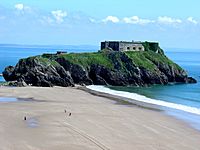 Tenby railway station was opened by the Pembroke and Tenby Railway as the terminus of the branch from the Pembroke direction in 1863, with the section eastwards to join the main line at Whitland following three years later.

In 1867, the construction of the Palmerston Fort on St Catherine's Island began. It was built to protect the coastline from a potential landing force. 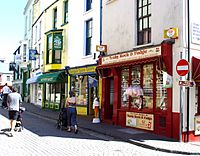 Colour and variety of the shops of Tenby

There are more than 200 listed buildings and other structures in and around Tenby.

The old town castle walls still survive, as does the Victorian revival architecture in a pastel colour scheme. The economy is still based on tourism, supported by a range of craft, art and other stores.

As with the rest of Wales and the wider United Kingdom, Tenby experiences a maritime climate with cool summers and mild winters, and often high winds. Due to its coastal southwest position, it is one of the sunnier locations in Wales. 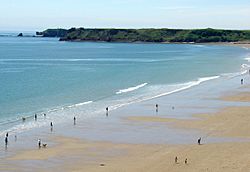 Long sandy beaches are the staple draw of Tenby to tourists

Tenby is a busy holiday resort in the summer. Most shops, pubs and restaurants in Tenby are specifically marketed to tourists. There are coastal boat trips to offshore islands and the town is a base for exploration of Pembrokeshire.

Tenby railway station is maintained and served by Arriva Trains Wales, with regular hourly services to Swansea and onwards to London Paddington via First Great Western. During peak season, trains run direct from Paddington to Tenby.

The nearest airport is Cardiff International, reached via either road or rail.

All content from Kiddle encyclopedia articles (including the article images and facts) can be freely used under Attribution-ShareAlike license, unless stated otherwise. Cite this article:
Tenby Facts for Kids. Kiddle Encyclopedia.