Cameron Corner is an outback locality in the Shire of Bulloo, Queensland, Australia. In the 2016 census, Cameron Corner had a population of 5 people. It borders New South Wales to the south and South Australia to the west. 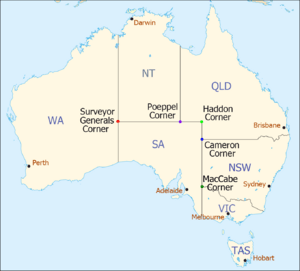 The corner and locality are named for the surveyor, John Brewer Cameron, from the New South Wales Lands Department, who spent two years during 1880–1882 marking the border between New South Wales and Queensland. Cameron erected a post there in September 1880 to mark its intersection with the border of South Australia. He placed a wooden marker every mile (1.6 km) eastwards along the interstate boundary.

This general area, which includes Sturt Stony Desert in the Lake Eyre Basin, was first explored by Captain Charles Sturt, who in 1844 went in search of a supposed inland sea in the center of Australia.

The Cameron Corner Store was established in 1990 by a Vietnam War veteran, Sandy Nall, and his wife Cathrine. As of 2014, the store is operated by the sole permanent residents of Cameron Corner, Fenn and Cheryl Miller. The store reportedly has a Queensland liquor licence, a New South Wales postal code and a South Australian telephone number. The locality also features a desert golf course.

New Year's Eve is celebrated three times each year in Cameron Corner (also in Poeppel Corner and Surveyor Generals Corner), because the three states that meet at the corner are in three time zones. 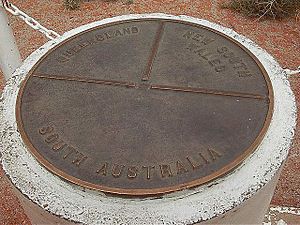 Cameron Corner Survey Marker which marks the corner is a heritage-listed site, being listed on the Queensland Heritage Register in 2012. 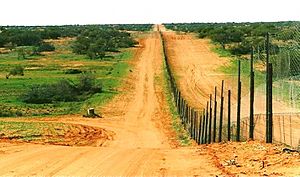 Dingo Fence on the 29th parallel of latitude. Sturt National Park (right of fence) - looking east from Cameron Corner after a heavy rainfall

There are a number of homesteads in the locality, including (from north to south):

All content from Kiddle encyclopedia articles (including the article images and facts) can be freely used under Attribution-ShareAlike license, unless stated otherwise. Cite this article:
Cameron Corner, Queensland Facts for Kids. Kiddle Encyclopedia.