Camp Evans Historic District is an area of the Camp Evans Formerly Used Defense Site in Wall Township, New Jersey. The site of the military installation (40°11′08″N 074°03′45″W﻿ / ﻿40.18556°N 74.06250°W﻿ / 40.18556; -74.06250) is noted for a 1914 transatlantic radio receiver and various World War II/Cold War laboratories of the United States Army (e.g., signal, vacuum tube, dosimetry, & photo-optics). From 1925 to 1935 the site was the headquarters for the New Jersey Ku Klux Klan. It was designated a National Historic Landmark District in 2012, in recognition of the site's long role in the development of modern civilian and military electronic communications.

The Belmar Receiving Station was established near the Belmar community together with a separate transatlantic transmitting facility at New Brunswick, New Jersey, by the Marconi Wireless Telegraph Company of America (American Marconi). The Belmar station included a mile-long bronze-wire receiving antenna strung on six 400 foot tall masts with three 150 foot balancing towers along the Shark River. Outgoing Morse-code messages were sent via a telegraph land-line from the Belmar Station to the transmitter. The receiving site also had a telegraph land-line to a New York office.

RCA sold the site to the Monmouth County Pleasure Seekers Club which was closely tied to Arthur H. Bell and the Ku Klux Klan. They owned the site from 1925 to 1935.

The Young People's Association for the Propagation of the Gospel purchased the Belmar station in 1936, and The King's College opened in September 1938 — when it was denied accreditation it relocated (currently it is in the Empire State Building).

The Signal Corps Radar Laboratory (SCRL) of Fort Hancock (formerly "Field Laboratory No. 3") in the late 1930s used a field set-up at the Belmar station to compare US radars with the British CH-CHL Radars (additional testing of hardware was often done at the nearby Twin Lights radar station, such as a trial radar network in 1939). 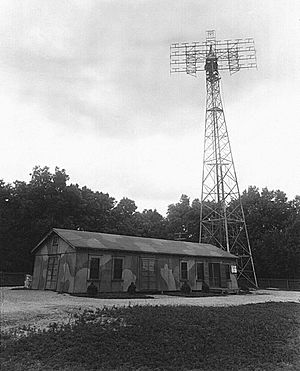 In 1941 the Belmar radio site was renamed the Evans Signal Laboratory after Wall Township purchased the original Marconi buildings and the surrounding 93 acres for the Army to move the SCRL. Initial construction of Camp Evans Historic District quickly built more than two dozen buildings and structures on the open land to the south and west of the Marconi buildings, including 2 boiler houses, 4 long rectangular one-story buildings, and two groups of radio antenna shelters. Two models of the SCR-271 radar were located near the intersection of Monmouth Boulevard and Watson Road (the model D had a sign for the SCRL Installation and Maintenance School).

By August 1943, Lt Col Paul E. Watson was the director of the Camp Evans Signal Laboratory. In addition to the Signal lab, Camp Evans had the Joint Army-Navy Tube Standardization (JANS) Laboratory and in May 1945, the Signal Corps Ground Services was reformed into the Signal Corps Engineering Laboratories. Initial experimentation with an enemy mortar and artillery locating radar was conducted at Camp Evans in 1944. By the end of the war Camp Evans had approximately 134 buildings and structures on approximately 217 acres including the Meteorological Branch of the Army Signal Corps (cf. the Meteorological Branch at McCook Field).

The facility was the initial point of contact for many top German scientists after WWII. These included Wernher von Braun and Erich Traub as part of Operation Paperclip. Camp Evans' black engineers contributed to electronic research, development, product distribution and training. For instance, Dr. Walter McAfee at Fort Monmouth first calculated the speed of the moon during Project Diana (it took 40 minutes to travel 15 deg, the width of the fixed radar beam rotating with the Earth).

After the World War II Peenemünde V-2s tracked by the giant Würzburg radar had reached space and their telemetry had been received (e.g., at burnout); during moonrise on January 10, 1946, Project Diana transmitted VHF radar pulses through the ionosphere to the moon and detected the reflection using a modified version of an experimental SCR-271 at the right of center Camp Evans. By August 1951, the Evans Signal Laboratory had a Meteorological Branch in Bldg. 39.

The 1952 Army Radiation Dosimetry Laboratory was established in building 9401 which had an underground vault, a Van de Graff machine, and AN/UDM-1A caesium-137 and AN/UDM-1 cobalt-60 calibration sources. The building had one and a half foot walls to protect contain the radiation during experiments. After a visit on October 20, 1953. McCarthyism claimed that Camp Evans was a "house of spies", but none of the camp's employees which Senator McCarthy investigated in 1953 and 1954 were ever prosecuted. In 1957, replacement equipment, on the frame of a captured German Wertzburg [sic] Reise radar, erected at the Project Diana site helped track the Soviet Union's Sputnik (cf. the Deal Test Site in Ocean Township that moved to Evans in 1973).

Camp Evans became part of the Signal Radio Propagation Agency and developed a radar weather set The Evans laboratory transferred from the SCGS to the U. S. Army Signal Corps Engineering Laboratories (SCEL), which in April 1958 was renamed the U. S. Army Signal Corps Research and Development Laboratory. The Project Diana site with building 9162 was used for the NASA TIROS-1 satellite's downlink antenna (60-foot dish shaped antenna, Space Sentry) on April 1, 1960, for the first photograph from space (the ground terminal [was] at Fort Monmouth in the laboratory receiving area). Radiation Incorporated's AN/TLM-18 Space Sentry at Camp Evans was used for minitrack. The Army Photo-optics Laboratory opened at Camp Evans in 1963. Most Deal Test Site facilities and personnel moved to Camp Evans due to the Deal site lease terminating on June 30, 1973.

The 1993 Base Realignment and Closure Commission at the end of the Cold War designated Camp Evans for closure (e.g., the Army Radiation Dosimetry Laboratory closed in 1999) Evans units moved to Fort Monmouth's Main Post (Project 42682), and Camp Evans land transferred to the National Park Service.

A district of Camp Evans was listed on the National Register of Historic Places in 2002, and camp areas became part of the Save America's Treasures project (2005 funds were donated to restore the AN/TLM-18). In 2011, Institute for Exploratory Research began in the basement at the InfoAge Science Center.

The InfoAge (Information Age Learning Center) was established in some of the historic district buildings . InfoAge is a member of the Association of Science-Technology Centers and part of the NASA Digital Learning Network. Its focus is science and the scientific and military history of Camp Evans. Exhibits and participating organizations include computers, electronic warfare, a Cold War-era fallout shelter, vintage radio, the National Broadcasters Hall of Fame and Museum, The Computer Deconstruction Laboratory, and the New Jersey Shipwreck Museum.

All content from Kiddle encyclopedia articles (including the article images and facts) can be freely used under Attribution-ShareAlike license, unless stated otherwise. Cite this article:
Camp Evans Historic District Facts for Kids. Kiddle Encyclopedia.