Canaan is a town in Grafton County, New Hampshire, United States. The population was 3,909 at the 2010 census. It is the location of Mascoma State Forest. Canaan is home to the Cardigan Mountain School, the town's largest employer.

The main village of the town, where 524 people resided at the 2010 census, is defined as the Canaan census-designated place (CDP), and is located at the junction of U.S. Route 4 with New Hampshire Route 118.

Chartered in 1761 by Governor Benning Wentworth, the town was named after the hometown of many early settlers, Canaan, Connecticut, which had been named by Puritans for the biblical land of Canaan. It was settled in the winter of 1766-1767 by John Scofield, who arrived with all his belongings on a hand sled. The land was filled with rocks, making agriculture difficult. The town constructed a broad road for its main street on a stretch of level land.

In 1828 attorney George Kimball helped organize building the town's Congregational church. He was among the New England abolitionists who founded the Noyes Academy in March 1835, one of the first in the region to admit students of all races. It opened with 28 white students, drawn largely from local families, and 17 black students; most of the latter came from outside the town and across the Northeast. Many local residents opposed bringing blacks into the town. On August 10, 1835, five hundred white men from Canaan and nearby towns used "nearly 100 yoke of oxen" to pull the building off its foundation, then burned it. Fearing for their safety, the black students left town, as did Kimball, who moved to Alton, Illinois.

The Canaan Union Academy was built on the site. Limited to white students, it operated for about 20 years. Later residents sympathetic to fugitive slaves operated a station of the Underground Railroad to help the people reach Canada or settle in New England.

The Northern Railroad (predecessor of the Boston & Maine Railroad) was constructed to the town in 1847, spurring development. Water powered mills were built on the streams. By 1859, the population had reached 1,682, and Canaan had one gristmill, three lath and clapboard mills, and one tannery.

Canaan was the site of a famous train wreck on September 15, 1907. Four miles west of Canaan Station, the southbound Quebec to Boston express, crowded with passengers returning from the Sherbrooke Fair, collided head-on with a northbound Boston & Maine freight train. Twenty-five people died, and an equal number were seriously injured. The accident was "due to a mistake in train dispatcher's orders."

The town center lies in the valley of the Indian River (a tributary of the Mascoma River) at the base of Mount Cardigan, which lies to the east in the neighboring town of Orange. A mountain road leads from Canaan to a trailhead in Cardigan Mountain State Forest, where hiking trails on the west slope of the mountain lead to the bare-rock summit. The highest point in Canaan is the top of an unnamed ridge (approximately 2,270 feet (690 m) above sea level) in the northeast corner of town, overlooking Derby Pond.

Canaan lies almost fully within the Connecticut River watershed, except for a tiny part of the northeast of the town, which is in the Merrimack River watershed.

The town is crossed by U.S. Route 4 and New Hampshire Route 118. 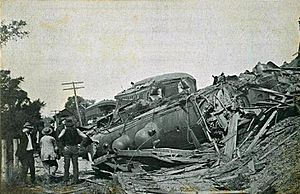 There were 1,588 households, of which 28.7% had children under the age of 18 living with them, 55.0% were headed by married couples living together, 9.4% had a female householder with no husband present, and 30.4% were non-families. 23.3% of all households were made up of individuals, and 7.6% were someone living alone who was 65 years of age or older. The average household size was 2.42, and the average family size was 2.81. 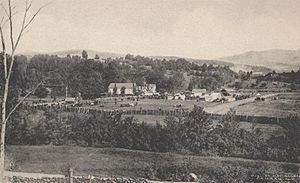 All content from Kiddle encyclopedia articles (including the article images and facts) can be freely used under Attribution-ShareAlike license, unless stated otherwise. Cite this article:
Canaan, New Hampshire Facts for Kids. Kiddle Encyclopedia.