Rumney is a town in Grafton County, New Hampshire, United States. The population was 1,498 at the 2020 census. The town is located at the southern edge of the White Mountain National Forest.

Rumney was named after Robert Marsham, 2nd Baron Romney (pronounced Rumney). The town was originally granted in 1761 by Governor Benning Wentworth to settlers from Colchester and East Haddam, Connecticut. It was first settled in 1765; however, some grantees failed to comply with the charter, so Rumney was regranted to another group of settlers in 1767.

Farmers found the town's soil fertile. By 1859, when the population was 1,109, other industries included fifteen sawmills, a large tannery, and a ladder factory. The Boston, Concord and Montreal Railroad commenced service to West Rumney in 1850-1851.

The town of Rumney contains several smaller villages. Rumney village, the town's central settlement, lies just north of the Baker River. Directly to the south, across the Baker River and adjacent to Route 25, is the village of Rumney Depot. The village of Stinson Lake, comprising development around the lake and at the foot of adjacent Stinson Mountain, is in the northern corner of the town, and West Rumney is located along Route 25 near the town's western border.

Rumney is home to the "Polar Caves", which are well known for their geological views and glowing rock formations. It is located along Route 25 near the town's eastern border.

Rumney Rocks, located between Rumney village and West Rumney, is a rock climbing destination renowned for its sport climbing routes.

The majority of the climbing is found on the numerous small cliff faces on the south face of Rattlesnake Mountain, much of which lies within the White Mountain National Forest. These cliffs are mostly made of schist, with some being granite, and vary from long smooth slabs to wildly overhung roofs and aretes. They range in height, with most falling between 40 feet (12 m) and 90 feet (27 m), but a few reach over 300 feet (91 m).

Most climbs are well bolted, with a few requiring additional protection. The climbs range from 5.0 to 5.15a, with the majority of routes falling between 5.10 and 5.12.

There were 569 households, out of which 29.9% had children under the age of 18 living with them, 57.5% were married couples living together, 6.3% had a female householder with no husband present, and 30.8% were non-families. 23.2% of all households were made up of individuals, and 8.8% had someone living alone who was 65 years of age or older. The average household size was 2.55 and the average family size was 3.00. 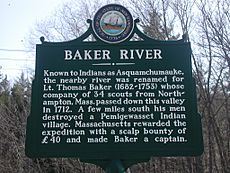 All content from Kiddle encyclopedia articles (including the article images and facts) can be freely used under Attribution-ShareAlike license, unless stated otherwise. Cite this article:
Rumney, New Hampshire Facts for Kids. Kiddle Encyclopedia.