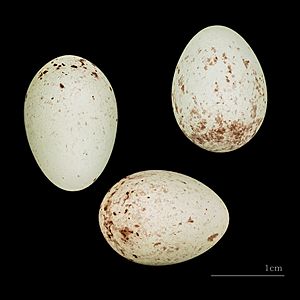 The Canary (Serinus canaria), also called the Island Canary, Atlantic Canary or Common Canary, is a small passerine bird. It belongs to the genus Serinus in the finch family. It is native to the Canary Islands, the Azores, and Madeira. Wild birds are mostly yellow-green, with brownish streaking on the back. The species is common in captivity. Different colour varieties have been bred. Canaries are domestic birds. They are popular pets.

The Atlantic canary can range from 10 to 12 cm (3.9 to 4.7 in) in length, with a wingspan of 21 to 23.7 cm (8.3 to 9.3 in) and a weight of 8.4 to 24.3 g (0.30 to 0.86 oz), with an average of around 15 g (0.53 oz). The male has a largely yellow-green head and underparts with a yellower forehead, face and supercilium. The lower belly and undertail-coverts are whitish and there are some dark streaks on the sides. The upperparts are grey-green with dark streaks and the rump is dull yellow. The female is similar to the male but duller with a greyer head and breast and less yellow underparts. Juvenile birds are largely brown with dark streaks.

It is about 10% larger, longer and less contrasted than its relative the European serin, and has more grey and brown in its plumage and relatively shorter wings.

The song is a silvery twittering similar to the songs of the European serin and citril finch.

Hybridization with the white-rumped seedeater has been noted by Antonio Arnaiz-Villena et al.

The bird is named after the Canary Islands, not the other way around. The colour canary yellow is in turn named after the yellow domestic canary, produced by a mutation which suppressed the melanins of the original dull greenish wild Atlantic canary colour. 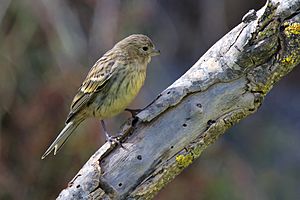 It occurs in a wide variety of habitats from pine and laurel forests to sand dunes. It is most common in semiopen areas with small trees such as orchards and copses. It frequently occurs in man-made habitats such as parks and gardens. It is found from sea-level up to at least 760 m in Madeira, 1,100 m in the Azores and to above 1,500 m in the Canary Islands.

It is a gregarious bird which often nests in groups with each pair defending a small territory. The cup-shaped nest is built 1–6 m above the ground in a tree or bush, most commonly at 3–4 m. It is well-hidden amongst leaves, often at the end of a branch or in a fork. It is made of twigs, grass, moss and other plant material and lined with soft material including hair and feathers.

The eggs are laid between January and July in the Canary Islands, from March to June with a peak of April and May in Madeira and from March to July with a peak of May and June in the Azores. They are pale blue or blue-green with violet or reddish markings concentrated at the broad end. A clutch contains 3 to 4 or occasionally 5 eggs and 2-3 broods are raised each year. The eggs are incubated for 13–14 days and the young birds leave the nest after 14–21 days, most commonly after 15–17 days.

It typically feeds in flocks, foraging on the ground or amongst low vegetation. It mainly feeds on seeds such as those of weeds, grasses and figs. It also feeds on other plant material and small insects.

All content from Kiddle encyclopedia articles (including the article images and facts) can be freely used under Attribution-ShareAlike license, unless stated otherwise. Cite this article:
Canary Facts for Kids. Kiddle Encyclopedia.