Arundinaria, commonly known as canes, is a genus of bamboo in the grass family.

Arundinaria is the only bamboo native to North America. The genus is native to the south-central and southeastern United States from Maryland south to Florida and west to the southern Ohio Valley and Texas. Within this region they are found from the Coastal Plain to medium elevations in the Appalachian Mountains. Its members have running rhizomes and are woody and tree-like, attaining heights from 0.5 to 8 metres (1.6 to 26.2 ft). They produce seeds only rarely and usually reproduce vegetatively, forming large genets. When seed production does occur, the colony usually dies afterwards. Among the distinctive features of the canes is a fan-like cluster of leaves at the top of new stems called a top knot.

The genus Arundinaria has a complex taxonomic history spanning over two centuries. The canes of the southeastern U.S. were originally described as two species of reed grasses in the genus Arundo by Thomas Walter in 1788. André Michaux, working in 1803 and unaware of Walter's work, correctly interpreted the canes as a distinct group and created the genus Arundinaria with one species. However, neither of these researchers left enough information to their successors, leading to confusion surrounding the identity of the species they had described. The later workers G.H.E. Muhlenberg and A.S. Hitchcock each changed the circumscriptions of the species within the group, but it wasn't until epitypes, type specimens that clarify older ambiguous names, were applied to Walter's and Michaux's species in 2009 that the taxonomy could be stabilised. Meanwhile, many similar Asian and even African bamboos were placed in this genus under a very broad concept for the group. Preliminary phylogenetic studies in 2006 using molecular and morphological evidence have suggested that the genus forms three natural species confined to the southeastern United States.

Early explorers in the U.S. described vast monotypic stands of Arundinaria called canebrakes that were especially common in river lowlands. These often covered hundreds of thousands of hectares. These have declined significantly due to clearing, farming and fire suppression. Prior to the European colonization of the Americas, cane was an extremely important resource for local Native Americans. The plant was used to make everything from houses and weapons to jewelry and medicines. It was used extensively as a fuel, and parts of the plant were eaten. The canebrakes also provided ideal land for crops, habitat for wild game, and year-round forage for livestock. After colonisation, cane lost its importance due to the destruction and decline of canebrakes, forced relocation of indigenous people, and the availability of superior technology from abroad.

There are currently three recognized species of the genus Arundinaria accepted by the World Checklist of Selected Plant Families as of March 2016. For each species listed below, binomial name is followed by author citation.

Plants currently treated in the genus Arundinaria were first described scientifically by Thomas Walter in his Flora Caroliniana, 1788. However, Walter did not recognise the canes as bamboo, and instead placed them in the superficially similar, but only distantly related grass genus Arundo. He described two species: Arundo gigantea Walt. and Arundo tecta Walt.. In 1803, the French botanist André Michaux, unaware of the flora prepared by Walter, also published a description of the canes he encountered. Michaux recognised only one species, but created a new monotypic genus for it: Arundinaria macrosperma Michx.. The name of the genus he used is derived from the Latin word used by Walter for the plants he described; namely arundo, meaning "reed".

Most recently, in 2006 researchers from Iowa State University and the University of North Carolina recognised and described a third species, Arundinaria appalachiana Triplett, Weakley & L.G. Clark. The plants that form this species were previously thought to form part of the natural genetic diversity of Arundinaria gigantea (Walt.) Muhl., but upon in depth analysis using modern phylogenetic methods based on morphology and amplified fragment length polymorphisms, the researchers determined that the canes form three species.

Despite the work done by Walter and Michaux, current researchers have had difficulty interpreting their circumscriptions of species boundaries. Walter designated no type specimens, and his Latin protologues, which describe the species, are vague and include features that could be any of the three species currently recognised. Michaux did designate a type specimen for the species he described, but it does not include enough of the plant to determine with confidence which species it represents, while his protologues were likewise not detailed enough to avoid ambiguity. Later researchers, such as Muhlenberg and Hitchcock, were thus effectively unable to resolve the taxonomy satisfactorily. In 2009, epitypes, a new kind of type first allowed by the International Code of Botanical Nomenclature in 2006 in order to clarify older ambiguous types, were designated for Arundo gigantea Walt. and Arundinaria macrosperma Michx.. This essentially allows current and future researchers to know precisely what is being discussed when the scientific names applied to these plants are used.

The genus is currently most commonly treated in a sensu stricto, making it an exclusively North American genus with three species: Arundinaria gigantea (Walt.) Muhl., Arundinaria tecta (Walt.) Muhl., and Arundinaria appalachiana Triplett, Weakley & L.G. Clark. However, in the past, and uncommonly in the present, the genus has been seen in a sensu lato. These interpretations include a number of Old World genera such as Bashania, Oligostachyum and Sarocalamus. More outdated systems included the large genera Fargesia and Sasa, giving the genus upwards of 400 species. When Asian taxa are included it is the only bamboo genus to occur in both the Old and New Worlds. 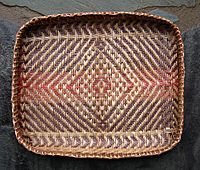 Ethnobotanists consider cane to have been extremely important to Native Americans in the Southeastern Woodlands before European colonisation. The plant was used to make structures, arrow shafts, weapons, fishing equipment, jewelry, baskets, musical instruments, furniture, boats, pipe stems, and medicines. Arundinaria gigantea, or river cane, has historically been used to construct Native American flutes, particularly among tribes of the Eastern Woodlands. The Atakapa, Muscogee Creek, Chickasaw, Choctaw, Cherokee, and other Southeastern tribes have traditionally used this material for mat and basket weaving, and the Chitimacha and Eastern Band Cherokee still widely weave with rivercane today. Bean poles made from dried canes can last for several years if properly stored when not in use.

Food uses include flour, cereal, and even "asparagus" of young shoots; however, caution should be used whenever foraging for cane seeds, as the extremely toxic fungus Ergot (Claviceps spp.) can colonize its seeds as well as those of the common cereals. Ergot-infected plants will have pink or purplish blotches or growths about the size of a seed or several times larger.

Medicinally, the Choctaw use the roots for their painkilling properties.

All content from Kiddle encyclopedia articles (including the article images and facts) can be freely used under Attribution-ShareAlike license, unless stated otherwise. Cite this article:
Cane (grass) Facts for Kids. Kiddle Encyclopedia.