Cape May warbler facts for kids

The Cape May warbler (Setophaga tigrina) is a species of New World warbler. It breeds in northern North America. Its breeding range spans all but the westernmost parts of southern Canada, the Great Lakes region, and New England. It is migratory, wintering in the West Indies. This species is a very rare vagrant to western Europe, with two records in Britain as of October 2013. The English name refers to Cape May, New Jersey, where George Ord collected the specimen later described by Alexander Wilson. This species was not recorded again in Cape May for another 100 years, although it is now known as an uncommon migrant there.

The genus name Setophaga is from Ancient Greek ses, "moth", and phagos, "eating", and the specific tigrina is Latin for "tiger-striped" from tigris, "tiger". 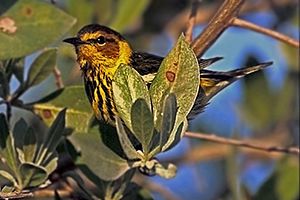 Other plumages resemble washed-out versions of the alternate-plumaged male's, lacking the strong head pattern. The yellowish rump and at least indications of the white wing bar are always present.

This species is insectivorous and lays larger clutches in years when spruce budworm is abundant. It picks insects from the tips of conifer branches or flies out to catch insects. The Cape May warbler also feeds on berry juice and nectar in winter, and has, uniquely for a warbler, a tubular tongue to facilitate this behavior.

The breeding habitat of this bird is the edges of coniferous woodland. Cape May warblers nest in dense foliage near the trunk of the tree, commonly a black spruce, and lay 4–9 eggs in a cup nest. This species can lay the largest clutch of any New World warbler, probably in response to increases in the numbers of spruce budworm during outbreaks.

The song of the Cape May warbler is a simple repetition of high tsi notes. The call is a thin sip. This bird usually sings from high perches.

All content from Kiddle encyclopedia articles (including the article images and facts) can be freely used under Attribution-ShareAlike license, unless stated otherwise. Cite this article:
Cape May warbler Facts for Kids. Kiddle Encyclopedia.