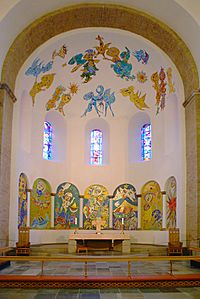 The apse in Ribe Cathedral (Denmark) decorated by Carl-Henning Pedersen

Carl-Henning Pedersen (23 September 1913 – 20 February 2007) was a Danish painter and a key member of the COBRA movement which existed from 1948 to 1951. He was known as the "Scandinavian Chagall", and was one of the leading Danish artists of the second half of the 20th century.

Pedersen was born in Copenhagen and brought up in the poor area near Vigerslev Alle. He held radical political beliefs. He joined the International Folk High School in Elsinore in 1933, where he met self-taught painter Else Alfelt. They married in 1934, and their first daughter, Vibeke Alfelt, was born later that year. Else Alfelt encouraged Pedersen to paint, and he first exhibited at the Artists' Autumn Exhibition (Kunstnernes Efterårsudstilling) in Copenhagen in 1936, where he showed four abstract works. His modernist style was at odds with the socialist realism preferred by his communist friends, who snubbed him: he argued with Bertolt Brecht about his art. His abstract works, with flat planes of colour, emulated the works of cubists and of Paul Klee.

Pedersen travelled on foot to Paris in 1939, where he saw works by Picasso and Matisse. He visited the exhibition of "degenerate art" (entartete Kunst) in Frankfurt am Main on his way home, where he was inspired by the paintings on show, particularly the works of Chagall, which remained a strong influence on his art for the rest of his life. His second daughter, Kari-Nina, was born in 1940. He joined the Høst group during the Nazi occupation of Denmark, writing about medieval Danish murals for its journal, Helhesten, and continued to produce controversial modern abstract works.

Pedersen and Else Alfelt were founder members of the CoBrA movement in 1948 together with Asger Jorn, Karel Appel and others. The movement took its name from the European cities where its founders were based: Copenhagen, Brussels and Amsterdam. They remained with the group until it dissolved in 1951, producing free-form, spontaneous images in strong, fantastic colours. He won the Eckersberg Award in 1950 and the Guggenheim Award in 1958. A retrospective was put on at the Carnegie Institute in Pittsburgh in 1961, and he was Denmark's representative at the Venice Biennale in 1962. He won the Thorvaldsen Medal in 1963.

Pedersen moved into monumental art in the 1960s and 1970s, producing a large mosaic, "Cosmic Sea", for the H. C. Ørsted Institute at Copenhagen University, and a huge tiled wall decoration, "Fantasy Play Around the Wheel of Life", for the Angli courtyard in Herning.

Pedersen was known for resisting to sell his works. Instead, he donated thousands to the Carl-Henning Pedersen and Else Alfelt Museum, which opened in Herning in 1976. Further works were donated to the Danish National Gallery (Statens Museum for Kunst) in early 2007.

Pedersen moved to Burgundy in the 1980s, but most of his work still came from Danish sources. He surprised many when he worked on the redecoration of the Gothic cathedral in Ribe, working on the murals, painted glass and mosaics to illustrate Bible stories from 1983 to 1987. He also produced bronze sculptures, and works in oils and watercolour.

He died in Copenhagen, after a long illness. He was survived by his second wife, Sidsel Ramson.

All content from Kiddle encyclopedia articles (including the article images and facts) can be freely used under Attribution-ShareAlike license, unless stated otherwise. Cite this article:
Carl-Henning Pedersen Facts for Kids. Kiddle Encyclopedia.