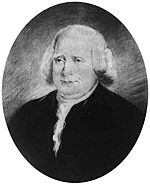 Painting thought to be of Carter Braxton

Carter Braxton (September 10, 1736 – October 10, 1797), was a signer of the United States Declaration of Independence and a representative of Virginia.

He was born on Newington Plantation in King and Queen County, Virginia and educated at the William and Mary. He married a wealthy heiress named Judith Robinson at the age nineteen, but she died two years later, leaving him two daughters.

When Peyton Randolph died in 1775, Braxton was appointed to take his place in the Continental Congress. He served in the Congress from February 1776 until August, when Virginia reduced its delegation to five members. Afterwards he returned to the House of Burgesses, and later served on the State's Executive Council.

All content from Kiddle encyclopedia articles (including the article images and facts) can be freely used under Attribution-ShareAlike license, unless stated otherwise. Cite this article:
Carter Braxton Facts for Kids. Kiddle Encyclopedia.