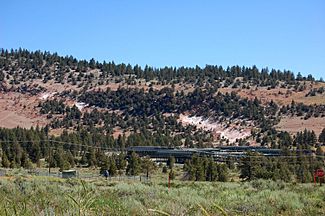 The power plant (bottom) with the formerly active geothermal areas on the slope above (white areas).

It is within the northern part of the Long Valley Caldera volcanic feature and zone, and beside U.S. Highway 395. California State Route 203 branches off to the west from the Highway 395 interchange at Casa Diablo Hot Springs, leading to the Mammoth Lakes and ski resort area, and Devils Postpile National Monument.

Casa Diablo Hot Springs was once the site of a regularly erupting geyser. It was an obsidian mine for Native Americans. Casa Diablo was a stagecoach station from 1878 to 1881. A tourist stop was built here in the 1920s, including an 'Indian Trading Post' and service station alongside old Highway 395.

All content from Kiddle encyclopedia articles (including the article images and facts) can be freely used under Attribution-ShareAlike license, unless stated otherwise. Cite this article:
Casa Diablo Hot Springs, California Facts for Kids. Kiddle Encyclopedia.