Casey Abrams (born February 12, 1991) is an American musician from Idyllwild, California, who finished in sixth place in the tenth season of American Idol, five weeks after being saved from elimination by the judges. A self-titled debut album was released in 2012 through Concord Records. Tales from the Gingerbread House was released on January 29, 2016.

Abrams was born on February 12, 1991 in Austin, Texas, to Pam Pierce and Ira Abrams. His father is Jewish and his mother is from a Catholic background, and Abrams grew up in an interfaith family. He spent his early years in the Chicago area, first in Evanston, Illinois, then in Wilmette, where he attended McKenzie Elementary School.

Abrams later moved to California and attended middle school and high school there. He was a student at Idyllwild Arts Academy in Idyllwild, California, where his father teaches film production. At Idyllwild Arts, he studied classical bass instruction and improvisation, and participated in the jazz ensembles, gaining a foundation in music history, piano, and jazz piano, and learning to write musical scores for films.

After graduating from Idyllwild in 2009, he attended University of Colorado at Boulder as a music major. He worked as a film camp counselor at Idyllwild Arts Summer Camp prior to his appearance on American Idol.

Abrams suffers from ulcerative colitis, an inflammatory disease which causes ulceration and inflammation of the colon, and that occasionally requires blood transfusions, which resulted in his having to be hospitalized while on American Idol.

Abrams auditioned for the tenth season of American Idol in Austin, Texas. He was selected as one of the Top 24 semi-finalists, but two days before he was due to perform for the semi-finals, he suffered severe stomach pains and was rushed to the hospital. He was well enough to perform on performance night, and was one of the five male vote receivers to advance to the Top 13; however, he missed the Top 13 results show due to his illness. He was the lowest vote receiver on the Top 11 result show, but was saved by the judges; they chose to save him immediately, stopping his supposedly last performance on the show halfway through it. He is the third finalist to be saved by the judges in three seasons.

Abrams was eliminated from the competition on April 28, 2011, finishing in sixth place. During his last performance he sang "I Put a Spell on You" by Screamin' Jay Hawkins, a song he had performed during the semi-finals. During the performance he kissed audience members, rolled onto the stage, thanked the judges, and sang the last two words ("you're mine") to fellow contestant Haley Reinhart.

On May 25, 2011, Abrams sang "Fat Bottomed Girls" with Jack Black on the American Idol finale. 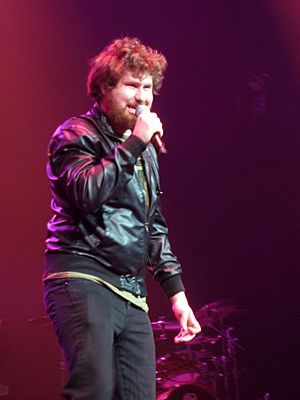 Abrams appeared and performed on The Tonight Show with Jay Leno in April 2011, and Live with Regis and Kelly, The Ellen DeGeneres Show, and MTV's The Seven in May of the same year. He was one of the performers in the American Idols LIVE! Tour 2011, which began in West Valley City, Utah in July 2011, and ended in Manila, Philippines in September 2011.

In August 2011, Abrams became a spokesman in a national campaign called IBD Icons to raise awareness of inflammatory bowel disease.

On January 8, 2012 Abrams signed with Concord Music Group. Abrams’ linking with Concord Music Group marks the second signing of a contestant from season ten to a non-Universal Music Group-owned label. His first album is self-titled, Casey Abrams. The album was executive produced by Randy Jackson and American Songwriter writes that "co-writers on the album include American Idol co-producer Iain Pirie and mega-hit songwriters Jason Mraz, Rune Westberg, Martin Terefe, and Toby Gad." The first single from the album "Get Out" was released on June 5, 2012. The album was released June 26, 2012. Performing on the show gave sales of his album a boost of nearly 2,000% over the previous week.

Abrams appeared on several YouTube videos (e.g.,) with Scott Bradlee's Postmodern Jukebox and toured with them in Europe.

In 2015, Abrams and the Gingerbread Band began work on his independently funded second album, an EP Tales from the Gingerbread House. He has also added the album to PledgeMusic and offered pre-order incentives in order to help fund the album's release. The EP contains five songs including "Cougartown", which contains background vocals by Haley Reinhart, and "Never Knew What Love Can Do", a duet with Reinhart.

In 2018, Abrams recorded and released his second full-length album, Put a Spell on You, whose title track is a reprisal of his final performance on American Idol. The album was recorded in just two days in Brooklyn's Hirsch Center. The album debuted at #5 on the Billboard Jazz Charts.

In 2019, Abrams released Jazz, marking a full-fledged return to his jazz roots, featuring standards like "I've Got the World on a String" and "Girl from Ipanema". Like Put a Spell on You, Jazz was also recorded at the Hirsch Center, with Abrams calling the decommissioned church's acoustics "magic." The album debuted at #2 on the Billboard Jazz Charts.

All content from Kiddle encyclopedia articles (including the article images and facts) can be freely used under Attribution-ShareAlike license, unless stated otherwise. Cite this article:
Casey Abrams Facts for Kids. Kiddle Encyclopedia.