Cast iron is a group of iron-carbon alloys with a carbon content greater than 2%. The alloy constituents affect its colour when fractured: white cast iron has carbide impurities which allow cracks to pass straight through. Grey cast iron has graphite flakes which deflect a passing crack and initiate countless new cracks as the material breaks.

Carbon (C) and silicon (Si) are the main alloying elements, with the amount ranging from 2.1–4 wt% and 1–3 wt%, respectively. Iron alloys with less carbon content are known as steel. While this technically makes these base alloys ternary Fe–C–Si alloys, the principle of cast iron solidification is understood from the binary iron–carbon phase diagram. Since the compositions of most cast irons are around the eutectic point of the iron–carbon system, the melting temperatures closely correlate, usually ranging from 1,150 to 1,200 °C (2,100 to 2,190 °F), which is about 300 °C (572 °F) lower than the melting point of pure iron.

Cast iron tends to be brittle, except for malleable cast irons. With its relatively low melting point, good fluidity, castability, excellent machinability, resistance to deformation and wear resistance, cast irons have become an engineering material with a wide range of applications and are used in pipes, machines and automotive industry parts, such as cylinder heads (declining usage), cylinder blocks and gearbox cases (declining usage). It is resistant to destruction and weakening by oxidation (rust).

The earliest cast iron artifacts date to the 5th century BC, and were discovered by archaeologists in what is now Jiangsu in China. Cast iron was used in ancient China for warfare, agriculture, and architecture. During the 15th century, cast iron became utilized for artillery in Burgundy, France, and in England during the Reformation. The first cast iron bridge was built during the 1770s by Abraham Darby III, and is known as The Iron Bridge. Cast iron is also used in the construction of buildings.

Grey cast iron is very good at conducting heat. Because of this, it is often used to make cookware. 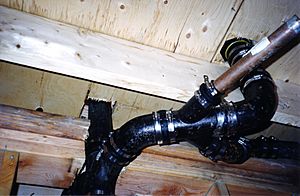 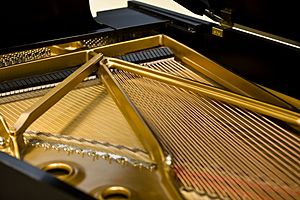 The earliest cast iron artifacts date to the 5th century BC, and were discovered by archaeologists in what is now modern Luhe County, Jiangsu in China. This is based on an analysis of the artifact's microstructures. Because cast iron is comparatively brittle, it is not suitable for purposes where a sharp edge or flexibility is required. It is strong under compression, but not under tension. Cast iron was invented in China in the 5th century BC and poured into moulds to make ploughshares and pots as well as weapons and pagodas. Although steel was more desirable, cast iron was cheaper and thus was more commonly used for implements in ancient China, while wrought iron or steel was used for weapons.

In the west, where it did not become available until the 15th century, its earliest uses included cannon and shot. Henry VIII initiated the casting of cannon in England. Soon, English iron workers using blast furnaces developed the technique of producing cast iron cannons, which, while heavier than the prevailing bronze cannons, were much cheaper and enabled England to arm her navy better. The technology of cast iron was transferred from China. Al-Qazvini in the 13th century and other travellers subsequently noted an iron industry in the Alburz Mountains to the south of the Caspian Sea. This is close to the silk route, so that the use of technology derived from China is conceivable. The ironmasters of the Weald continued producing cast irons until the 1760s and armament was one of the main uses of irons after the Restoration.

Cast iron pots were made at many English blast furnaces at the time. In 1707, Abraham Darby patented a method of making pots (and kettles) thinner and hence cheaper than his rivals could. This meant that his Coalbrookdale furnaces became dominant as suppliers of pots, an activity in which they were joined in the 1720s and 1730s by a small number of other coke-fired blast furnaces.

The development of the steam engine by Thomas Newcomen provided further market for cast iron, since cast iron was considerably cheaper than the brass of which the engine cylinders were originally made. John Wilkinson was a great exponent of cast iron, who, amongst other things, cast the cylinders for many of James Watt's improved steam engines until the establishment of the Soho Foundry in 1795. 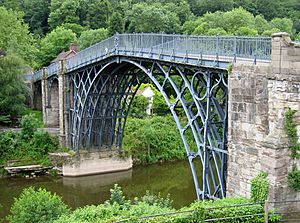 Iron Bridge over the River Severn at Coalbrookdale, England

The use of cast iron for structural purposes began in the late 1770s, when Abraham Darby III built the Iron Bridge, although short beams had already been used, such as in the blast furnaces at Coalbrookdale. Other inventions followed, including one patented by Thomas Paine. Cast iron bridges became commonplace as the Industrial Revolution gathered pace. Thomas Telford adopted the material for his bridge upstream at Buildwas, and then for a canal trough aqueduct at Longdon-on-Tern on the Shrewsbury Canal.

It was followed by the Chirk Aqueduct and the Pontcysyllte Aqueduct, both of which remain in use following the recent restorations. Cast iron beam bridges were used widely by the early railways, such as the Water Street Bridge at the Manchester terminus of the Liverpool and Manchester Railway. Problems arose when a new bridge carrying the Chester and Holyhead Railway across the River Dee in Chester collapsed in May 1847, less than a year after it was opened. The Dee bridge disaster was caused by excessive loading at the centre of the beam by a passing train, and many similar bridges had to be demolished and rebuilt, often in wrought iron. The bridge had been erroneously designed, being trussed with wrought iron straps, which were wrongly thought to reinforce the structure. The centres of the beams were put into bending, with the lower edge in tension, where cast iron, like masonry, is very weak.

The best way of using cast iron for bridge construction was by using arches, so that all the material is in compression. Cast iron, again like masonry, is very strong in compression. Wrought iron, like most other kinds of iron and indeed like most metals in general, is strong in tension, and also tough – resistant to fracturing. The relationship between wrought iron and cast iron, for structural purposes, may be thought of as analogous to the relationship between wood and stone.

Nevertheless, cast iron continued to be used in inappropriate structural ways, until the Tay Rail Bridge disaster of 1879 cast serious doubt on the use of the material. Crucial lugs for holding tie bars and struts in the Tay Bridge had been cast integral with the columns and they failed in the early stages of the accident. In addition, the bolt holes were also cast and not drilled, so that all the tension from the tie bars was placed on a corner, rather than being spread over the length of the hole. The replacement bridge was built in wrought iron and steel.

All content from Kiddle encyclopedia articles (including the article images and facts) can be freely used under Attribution-ShareAlike license, unless stated otherwise. Cite this article:
Cast iron Facts for Kids. Kiddle Encyclopedia.