Kids Encyclopedia Facts
This page is about the basilica cathedral in Cincinnati, Ohio, United States. For the cathedral in Peterborough, Ontario, Canada, see Cathedral of Saint Peter-in-Chains. For other uses, see St. Peter ad Vincula.

Cathedral Basilica of Saint Peter in Chains is the cathedral of the Roman Catholic Archdiocese of Cincinnati The basilica is a Greek revival structure located at 8th and Plum streets in downtown Cincinnati, Ohio, United States. It is dedicated to Saint Peter's imprisonment and liberation. The church's cornerstone was laid on May 20, 1841, under the direction of then-bishop—later archbishop—John Baptist Purcell, and the church was formally dedicated on November 2, 1845, as the first large church west of the Allegheny Mountains. On June 29, 2020 Pope Francis conferred the title of Minor Basilica on St. Peter in Chains. 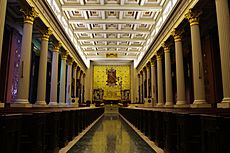 The interior of the basilica

St. Peter in Chain's striking single spire, made of pure white limestone, rises 224 feet (68 m) above street level, which made the church the tallest man-made structure in the city for many decades. The columns are 33 feet (10 m) high, symbolizing the number of years in Jesus' life.

The interior of St. Peter in Chains is distinctly unique among Roman Catholic cathedrals in America, with its Greek-themed mosaics depicting the Stations of the Cross, its ornate Corinthian columns and its massive bronze doors. The crucifix is by Benvenuto Cellini, the murals by Carl Zimmerman and the mosaic in the apse is the work of Anton Wendling.

The first Catholic church in Cincinnati was Christ Church, originally located at Liberty and Vine streets, then later at 6th and Sycamore streets, at what is now the site of St. Francis Xavier Church. Christ Church served as the young diocese's de facto cathedral until the first St. Peter's Cathedral was built on the site. St. Peter's was dedicated on December 17, 1826, becoming the seat of the diocese.

The second and current St. Peter's Cathedral was dedicated in 1845. The large stone angels that were on each side of the main altar were created by Odoardo Fantacchiotti in the late 1840s. They were among the first European sculptures to come to Cincinnati and now grace the Cincinnati Art Museum.

By the 1930s, St. Peter in Chains had become dilapidated, its signature white limestone covered in soot. In 1938, Archbishop John T. McNicholas moved the archdiocesan seat from St. Peter Chains to the more modern St. Monica's in the Clifton Heights neighborhood north of downtown. St. Peter in Chains deteriorated further as an ordinary parish church. In the mid-1950s, under Archbishop Karl Joseph Alter's urban-renewal program and in accordance with the city's master plan, St. Peter in Chains underwent significant restoration and expansion. Architect Edward J. Schulte designed new transepts, a rectory, a sacristy, and archdiocesan offices. The church was re-dedicated as a cathedral on November 3, 1957, amid celebration and fanfare.

In 1977, the cathedral hosted a visit from Polish Archbishop Karol Wojtyla, who the following year became Pope John Paul II. To date, more than two dozen Roman Catholic bishops have been consecrated within its walls, and the cathedral is a popular venue for weddings, as well as the annual ordination of the archdiocese's priests and deacons.

All content from Kiddle encyclopedia articles (including the article images and facts) can be freely used under Attribution-ShareAlike license, unless stated otherwise. Cite this article:
Cathedral Basilica of Saint Peter in Chains (Cincinnati) Facts for Kids. Kiddle Encyclopedia.