The Cathedral of Saint Peter is the mother church of the Roman Catholic Diocese of Wilmington in Wilmington, Delaware. Located on West 6th Street, the cathedral is located in the Quaker Hill Historic District.

The church was designed by Pierre Bauduy, who also designed Wilmington's town hall. The cornerstone was laid in 1816; the 30- by 40-foot (9.1- by 12-meter) Romanesque church was executed in brick and dedicated on September 12, 1818. The first Mass was said inside the structure the next day by Father Patrick Kenny. In 1829, a bell tower was installed and the church was extended to its current length of 60 feet (18 m).

Extensive remodeling was performed between 1870 and 1905—improvements included work on frescoes, the addition of a marble baptistery, three altars, a chancel railing, a barrel-domed roof, and the bishop's cathedra. (The Diocese of Wilmington had been erected by Pope Pius IX in 1868.) The refurbishment was completed and the church was ready to be consecrated as the diocesan cathedral in 1905. When the apostolic pro-nuncio arrived, however, he noticed that the church was joined to a rectory and a school—since a cathedral must be free-standing and debt free, he refused and it was designated a pro-cathedral instead. The necessary changes were gradually made, and the church was eventually designated the cathedral of the diocese.

The cathedral's Munich-style stained glass dates from about 1900, and was probably created by Franz Xavier Zettler, master glass painter to the Royal Court of Bavaria from 1870 to 1910, or his pupil, Franz Mayer.

Further renovations were made in 1981 to repair structural damage, as well as to modify the sanctuary of the cathedral in accordance with the liturgical style in vogue after the Second Vatican Council. Flying buttresses were added to support the transept walls in 1991, and a steel substructure installed for the pillars and choir loft.

By 2007 other structural problems had become apparent. A plaster rosette came loose and fell from the ceiling into one of the pews, and earlier work designed to fortify the arches leading into the side chapels had left two eyesores: metal poles which went from floor to ceiling, blocking the view of the tabernacle which had already been removed from a place of prominence in the cathedral (the cathedra had been put in the tabernacle's original place). Leaks in the roof were spotted and it became clear that major work was needed to maintain the building as a safe place in which to worship.

Thanks to a grant from the Catholic Diocese Foundation, the entire roof was replaced over the course of a nine-month period. The work was done in such a way that the cathedral was able to remain open for worship throughout the project.

With the assistance of the cathedral's rector, Father Joseph Cocucci, further renovations were undertaken. The bishop's cathedra was returned to the side of the sanctuary, restoring the tabernacle to the center behind the altar. A shrine to the Blessed Virgin Mary that was accessible to those with physical disabilities was created, and the baptismal font was moved to its proper place near the entrance to the church. In his concluding remarks at the first Mass celebrated once the repairs and renovations had been completed, on 22 November 2007 (Thanksgiving Day), Bishop Michael Saltarelli thanked Father Cocucci "for putting the Blessed Sacrament in His proper place and for putting the bishop in his proper place."{http://cathedralofstpeter.com/historyofthecathedral.html} 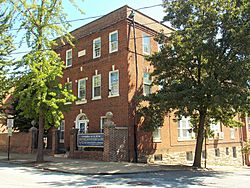 The cathedral parish of Saint Peter has had sixteen rectors since its founding in 1804:

All content from Kiddle encyclopedia articles (including the article images and facts) can be freely used under Attribution-ShareAlike license, unless stated otherwise. Cite this article:
Cathedral of Saint Peter (Wilmington, Delaware) Facts for Kids. Kiddle Encyclopedia.