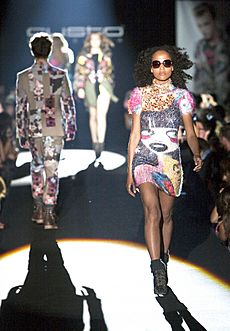 Catwalk at a Barcelona fashion show

Catwalk on a bridge

A catwalk is a raised walkway. The term is most often used for fashion shows, where models walk along showing off the clothes. A catwalk on a ship is a passageway above decks. A similar term is runway, but that need not be off the ground.

Catwalk, a documentary on life on the fashion runways, was filmed in 1993 by director Robert Leacock. The movie followed models Christy Turlington, Naomi Campbell, Yasmin Le Bon, Kate Moss, and Carla Bruni as they jetted around London, Milan, Paris, and New York during Spring Fashion Week, including behind-the-scenes footage. The movie was shot in black and white and colour, and featured many top designers at work, like a young John Galliano, Justin Thomas, Karl Lagerfeld, and Gianni Versace four years before his death.

All content from Kiddle encyclopedia articles (including the article images and facts) can be freely used under Attribution-ShareAlike license, unless stated otherwise. Cite this article:
Catwalk Facts for Kids. Kiddle Encyclopedia.