The Ceja Formation is a Pliocene to Pleistocene geologic formation exposed near Albuquerque, New Mexico.

The formation consists of weakly consolidated sandstone and conglomerate, varying in color from light yellowish-brown to reddish-yellow or pink. It consists of fluvial deposits with paleocurrent directions from the west. The lower beds are predominantly interbedded sandstone and mudstone while the upper beds are predominantly sandstone to conglomerate with occasional small boulders. The formation lies disconformably on the Arroyo Ojito Formation and its top beds are gravels capping the Llano de Albuquerque geomorphic surface. The lower beds sometimes contain white micritic carbonate pebbles interpreted as reworked caliche of the underlying Arroyo Ojito Formation. Total exposed thickness is 94–104 meters (308–341 ft).

Well logs indicate that the Ceja thickens to more than 420 meters (1,380 ft) in the subsurface on the western margin of the Rio Grande valley, where it likely interfingers with the Sierra Ladrones Formation.

The formation is divided into the Atrisco Member, Rio Puerco Member, and Santa Ana Mesa member. The Atrisco Member is reddish-brown mudstone and sandstone, some 85–100 meters (279–328 ft) thick, mostly found in the subsurface but distinctive on well logs and discernible as a gradational boundary at the type section and as a sharper boundary further north. This is overlain by the Rio Puerco Member. 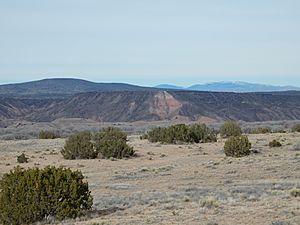 The Santa Ana Mesa Member consists of reddish-brown sandstone and conglomerate conspicuous in the flanks of Santa Ana Mesa. It contains a 7.1 Ma pumice bed. The unit is typically redder than the other members of the Ceja Formation.

The unit was first defined by V.C. Kelley in 1977 for beds formerly assigned to the upper buff member of the Santa Fe Formation by Kirk Bryan and Franklin T. McCann in 1936. S.D. Connell and coinvestigators reassigned the member to the Arroyo Ojito Formation in 1999.

In 2007, Williams and Cole recommended that the Arroyo Ojito Formation be abandoned, because the name was being used inconsistently and because the formation straddled a significant region unconformity since named the Rincones paleosurface. They promoted the Ceja Member, which lay above the Rincones paleosurface, to formation rank, a recommendation with which Connell subsequently concurred.

All content from Kiddle encyclopedia articles (including the article images and facts) can be freely used under Attribution-ShareAlike license, unless stated otherwise. Cite this article:
Ceja Formation Facts for Kids. Kiddle Encyclopedia.