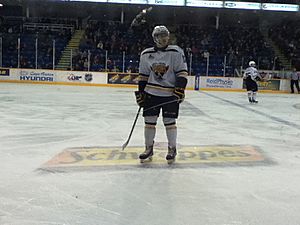 Centre 200 is Cape Breton's primary sports and entertainment facility, located in Sydney, Nova Scotia. It is home to the QMJHL's Cape Breton Eagles. Besides ice hockey, the arena hosts many other events, such as rock concerts, figure skating, and antique/custom car shows. The facility features an obstruction-free sports arena that seats 5,000 people, expandable seating to 6,500 for concert hall purposes, and exhibit space of 17,000 sq ft (1,600 m2). with the possibility of another 3,000 sq ft (280 m2). upon removal of telescopic seating.

Centre 200 was conceived as a bicentennial project of the municipality, and was constructed on the former site of the old Sydney Forum in the downtown area. The venue opened in early 1987, and hosted a concert by musician Bryan Adams as its first major event. It was the primary sporting venue for the 1987 Canada Winter Games and hosted the opening ceremonies which were attended by then-Prime Minister Brian Mulroney.

From 1988 to 1996, the arena was home to professional ice hockey, the American Hockey League's Cape Breton Oilers, until the parent Edmonton Oilers elected to relocate the team to Hamilton, Ontario. In 1993, the Oilers won the AHL's Calder Cup championship in front of a sellout crowd at Centre 200.

The arena hosted the MJAHL's Cape Breton Islanders for the 1996–97 season. 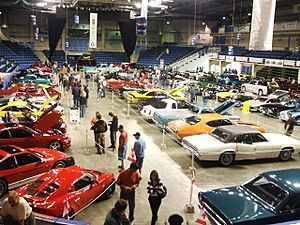 Prior to the 1997–98 QMJHL season, the Granby Prédateurs, winners of the 1996 Memorial Cup, relocated from Granby, Quebec to Sydney, Nova Scotia and were renamed the Cape Breton Screaming Eagles. The team, which won a division title in 2003–04, remains Centre 200's primary tenant. Future National Hockey League stars such as Sidney Crosby, Marc-André Fleury, and Vincent Lecavalier have skated at Centre 200 as QMJHL players.

In March 2000, Centre 200 hosted the 2000 Esso Canadian National Championship for women's ice hockey, during which Ontario defeated Quebec to win the gold medal. Centre 200 co-hosted the 2003 World Junior Ice Hockey Championships, along with the Halifax Metro Centre in Halifax, Nova Scotia. The arena is very popular for community ice hockey, annually hosting both the Sydney Academy Blue and White Pepsi Challenge Cup and the Royal Canadian Legion Bantam AAA Challenge Cup. The tournaments and games provide hospitality for teams from all over Nova Scotia and generally draw large crowds.

Centre 200 hosted the 2008 QMJHL Entry Draft, which was projected to inject over $2 million into the local economy. The arena also hosted game one of the 2008 ADT Canada-Russia Challenge in November 2008.

In March 2009, it was announced that major renovations would occur to the arena, thanks to financial contributions from the Provincial and federal governments, the municipality and $500,000 from the Cape Breton Screaming Eagles. Renovations include a new video scoreboard, 13 luxury boxes and new club seating. It is anticipated that the renovations will increase the building's capacity to over 5,000.

In 2018, the venue hosted concerts by Bryan Adams and Chicago. In February 2019, Centre 200 was host for the 2019 Scotties Tournament of Hearts Canadian national women's curling competition.

Centre 200 is named in honour of the two-hundredth anniversary of the founding of Sydney, which took place in 1785. In the original vision, the venue was to have a larger seating capacity and be named "Centre 2000" but funding issues led to a smaller venue than originally proposed.

Centre 200 is located on George Street, which lies in the heart of Sydney. The arena is connected to a Casino Nova Scotia which was added in 1995, and hosts a Tim Hortons restaurant within its parking lot, generally bringing good business to both venues when Centre 200 hosts an event. However, frequent traffic congestion and shortage of convenient parking spaces has drawn criticism from attendees.

All content from Kiddle encyclopedia articles (including the article images and facts) can be freely used under Attribution-ShareAlike license, unless stated otherwise. Cite this article:
Centre 200 Facts for Kids. Kiddle Encyclopedia.