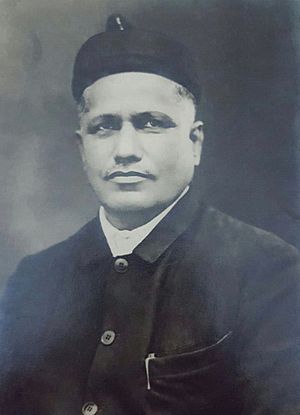 Chandrashekhar Agashe (Marathi: चंद्रशेखर आगाशे; IAST: Candraśekhara Āgāśe; 14 February 1888 — 9 June 1956) was an Indian industrialist and lawyer, best remembered as the founder of the Brihan Maharashtra Sugar Syndicate Ltd. He served as the managing director of the company from its inception in 1934 till his death in 1956. He served as the President of the Bhor State Council from 1932 to 1934.

All content from Kiddle encyclopedia articles (including the article images and facts) can be freely used under Attribution-ShareAlike license, unless stated otherwise. Cite this article:
Chandrashekhar Agashe Facts for Kids. Kiddle Encyclopedia.