Channels of the Hawaiian Islands facts for kids 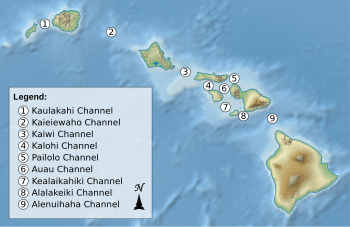 Channels of the Hawaiian Islands

In an archipelago like the Hawaiian Islands the water between islands is typically called a channel or passage. Described here are the channels between the islands of Hawaiʻi, arranged from northwest to southeast.

The Kaulakahi Channel separates the islands of Niʻihau and Kauaʻi. It is 17 miles (27 km) wide. Kaulakahi translates to "the single flame (streak of color)."

The Kaʻieʻie Waho Channel, also called the Kauai Channel, separates the islands of Kauaʻi and Oʻahu, at a distance of 72 miles (116 km). Kaʻieʻie Waho means "Outer Kaʻieʻie," named after the ʻieʻie vine (Freycinetia arborea). The maximum depth of the channel is over 11000 feet.

The Kaʻiwi Channel (also known as the Molokai Channel) separates the islands of Oʻahu and Molokaʻi, and is 26 miles (42 km) wide. Maximum depth is 2,300 feet (700 m). Ka Iwi means "the bone". There are annual paddleboarding and outrigger canoe paddling contests which traverse this channel; swimming the channel is one of the 7 challenges in the Oceans Seven open water swimming series.

The Kalohi Channel is the stretch of water separating Lānaʻi and Molokaʻi. Depth of water in this channel is about 260 feet (79 m) and width is 9.3 miles (15.0 km). This is one of the less treacherous channels between islands in the archipelago, although strong winds and choppy sea conditions are frequent. Kalolohia beach on the Lānaʻi coast is also known as "Shipwreck Beach" because of a wreck on the reef there. Kalohi means "the slowness."

The Pailolo Channel separates the islands of Molokaʻi and Maui. Although the channel is only about 8.4 miles (13.5 km) at its shortest point, it is one of the windiest and roughest in the Hawaiian Islands. The name is probably a contraction of pai (lift) and olo'olo (shifting); some claim pailolo translates to 'crazy fisherman,' although this is more likely a recent interpretation.

The ʻAuʻau Channel is one of the most protected areas of ocean in the Hawaiian Islands, lying between Lānaʻi and Maui. The channel is also protected by Molokaʻi to the north, and Kahoʻolawe to the south. The depth of the channel reaches 108 feet (33 m), and its width is 8.8 miles (14.2 km). ʻAuʻau channel is a whale-watching center in the Hawaiian Islands. Humpback whales migrate approximately 3,500 miles (5600 km) from Alaskan waters each autumn and spend the northern hemisphere winter months in the protected waters of the channel.

ʻAuʻau translates to "to take a bath" referring to its calm bath-like conditions.

The Kealaikahiki Channel is the channel between Lānaʻi and Kahoʻolawe. It literally means "the road to Tahiti"; if one takes a bearing off of Kealaikahiki Point on Kahoʻolawe while in the channel and heads directly straight, one arrives, more or less, in Tahiti. In practice, however, Polynesian navigators probably did not quite ply a straight route to Tahiti. The channel is 17 miles wide.

The ʻAlalākeiki Channel separates the islands of Kahoʻolawe and Maui, at a distance of 7 miles. ʻAlalākeiki means "crying baby." §

The middle of the ʻAuʻau channel off Lahaina is known as the Lahaina Roads. Once filled with whalers when Lahaina was a capital for that industry, Lahaina Roads were later adopted as an alternate anchorage for the main U.S. Pacific Fleet based at Pearl Harbor. In the planning for the attack on Pearl Harbor, the Japanese had hoped that the Pacific Fleet still used Lahaina as an anchorage as ships sunk in the deep water there would have been unrecoverable. However, Lahaina was not used, and the bulk of the fleet remained moored in Pearl Harbor. The Roads are still a common moorage for oceangoing cruise ships and naval vessels of many flags, including the U.S., whose crews enjoy liberty on the island.

The Hoʻomoʻa Channel separates the islands of Lehua and Nihoa. Hoʻomoʻa means "to cook."

The Hawaiʻiloa Channel to the northwest of the islands of Nihoa. Named after Hawaiʻiloa, hero of an ancient Hawaiian legend about the settling of the Hawaiian Islands.

All content from Kiddle encyclopedia articles (including the article images and facts) can be freely used under Attribution-ShareAlike license, unless stated otherwise. Cite this article:
Channels of the Hawaiian Islands Facts for Kids. Kiddle Encyclopedia.