Dracophyllum arboreum, commonly known as Chatham Island grass tree and tarahinau (Māori), is a species of tree in the family Ericaceae. Endemic to the Chatham Islands, D. arboreum grows to a height of 18m and has leaves that differ between the juvenile and adult forms. Flowering occurs all year round, yielding small white flowers which later become tiny brown fruit.

D. arboreum was first described by the botanist Leonard Cockayne in the 1901 issue of the Transactions and Proceedings of the Royal Society of New Zealand, then known as the Transactions and Proceedings of the New Zealand Institute, but only published in July of 1902. Although not a full description, he cited that the differences in foliage between the juvenile and adult forms where more than enough to classify it as separate from Dracophyllum scoparium, despite their similar flowers.

In a 1952 supplement of the Trans. Proc. R. Soc. N. Z., W. R. B. Oliver published a revised taxonomic arrangement of the genus Dracophyllum. In this supplement he moved D. arboreum from the group containing D. scoparium into the group of D. sinclairii, citing their similar life history and "general resemblance." The genus has not yet been fully genetically sequenced, however, so these placements are not in any way final.

Endemic to the Chatham Islands, an island chain around 800km east of the south Island, it is found on the Chatham, Rangiuria and Rangatira Islands. It is found in abundance on the southern tableland of Chatham Island in lowland forests and in the drier regions of swamps. It is also found in the transition section between Moorland and forest in association D. paludosum - particularly in its juvenile form. On Rangiuria Island, also known by its English name Pitt Island, D. arboreum dominates the upland forest with Brachyglottis huntii and various species of tree ferns. 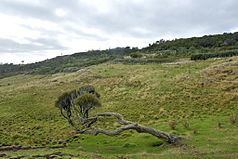 The Chatham Island chain is extremely windswept, receiving an average annual wind speed of 24 km/h as well as recording a wind speed of 157 km/h in January 1993 and 124 km/h just a few months later. To adapt to this D. arboreum has evolved to be heteroblastic, developing large leaves as juveniles which become thin, wind resistant, needles as they gain maturity. Many species in mainland New Zealand are heteroblastic as well, such as the Lancewood, but likely because of large, now extinct, browsing birds such as the Moa. The Chatham Islands have never had these which means D. arboreum has likely evolved in this way due to climatic factors such as the wind; the thinner leaves reducing stress on the stalks.

D. arboreum can also grow as an epyphite, beginning its life typically in a tree fern, before extending its roots downwards and eventually gaining a trunk.

Dracophyllum is from the genus's similarity to the species in the genus Dracaena from the Canary Islands and is from the Ancient Greek for "dragon-leaf". The specific epithet arboreum means "tree-like".

D. arboreum can be cultivated from seed but will be difficult to maintain and prefers a damp, acidic, peaty soil - like its habitat on Chatham Island.

All content from Kiddle encyclopedia articles (including the article images and facts) can be freely used under Attribution-ShareAlike license, unless stated otherwise. Cite this article:
Chatham Island grass tree Facts for Kids. Kiddle Encyclopedia.