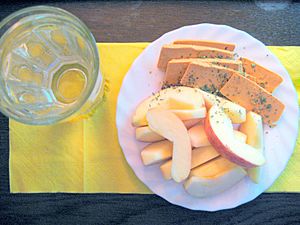 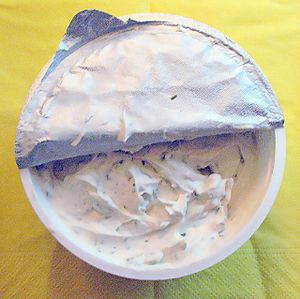 Cheese analogues are substitutes of cheese that are made to imitate the taste and the look of real cheese. Such substitutes replace the dairy milk by other plant-based ingredients. The fat in the milk is replaced by other kinds of fat of animal or plant origin. Sometimes the proteins found in milk are also replaced by proteins from other sources. Cheese analogues are usually used because of health reasons, for example lactose intolerance. They are also used as a personal choice (e.g. veganism, or for religious reasons). In most cases, Cheese analogue is kosher.

Cheese analogue cost less to make than real cheese. By carefully choosing the ingredients in the analogue, other characteristics such as the melting temperature and the taste can be changed. Flavour enhancers can be added to make the product taste similar to Parmesan, feta or Camembert cheese, for example. Food coloring is used to match the color of a cheese product. Real cheese undergoes a ripening process, cheese analogues do not have this: Usually, vegetable oil is heated, and mixed with a premade powder and water. Flavour enhancers are added. After cooling, the product is ready for packaging.

In Europe, cheese analogue is used for gastronomy and in bakeries; In the United States, it is marketed as a replacement for real cheese. The arguments used cater to people who do not want to use real cheese for personal reasons, or that cannot use it for health reasons.

As with plant milk, vegan cheese may be made from soybeans, rice, almonds, nutritional yeast and other non-dairy ingredients. It is aimed at vegans and others wanting to avoid animal products, for moral, religious or health reasons, including lactose intolerance or a desire to avoid cholesterol. Vegan cheeses may be lower in fat compared to dairy cheese, are cholesterol-free and are often a source of soy protein and isoflavones. Many have calcium added. Several brands melt similarly to dairy cheese, while others stay mostly firm, or melt only when grated. Varieties include:

Provel pizza cheese in a five-pound block. This product is commonly used in the preparation of St. Louis-style pizza.

One variant of pasteurized processed cheese dairy products is designed to melt well on pizza, while remaining chewy. These types of cheeses are sometimes referred to as "analogue pizza cheese". They are used on some commercially produced pizzas in North America. These types of cheeses may be formulated for processing with basic cheese-making equipment but without the additional equipment and processing that Mozzarella cheese requires, such as the processes of mixing and molding. They tend to have a soft texture and once melted, may have a slightly "stringy" quality when pulled or bitten into. They may lack in a fusion, or melt together when cooked. It has been stated that pizza cheese appears to be the leading type of cheese analogue produced globally. In 1987 it was asserted that—at that time—each year in the United States over 700 million frozen pizzas were sold, three quarters of which contain cheese substitutes.

All content from Kiddle encyclopedia articles (including the article images and facts) can be freely used under Attribution-ShareAlike license, unless stated otherwise. Cite this article:
Cheese analogue Facts for Kids. Kiddle Encyclopedia.