A cheese dog is a hot dog served with cheese or processed cheese on it or stuffed within it, as a filling.

In the United States, sliced or grated cheese, such as cheddar or American cheese, is commonly used, often served melted on the hot dogs. The use of other types of cheese also occurs, such as cream cheese and Swiss cheese. The cheese may be on the bun, on the wiener, processed inside the hot dog, or placed in the middle of a hot dog that has been sliced in half. 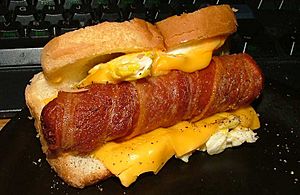 A danger dog with cheese

In Chicago there is a variation of the danger dog called the Francheezie. Typically found at "greasy spoon" restaurants, it consists of a jumbo hot dog split in the middle and filled with Cheddar cheese (or Velveeta). It is wrapped in bacon and deep-fried, then served on a toasted bun.

Another variation is a hot dog topped with macaroni and cheese.

A reuben dog can consist of a hot dog topped with ingredient combinations such as corned beef, sauerkraut, Swiss cheese and Russian dressing.

A Seattle-style hot dog, sometimes referred to as a "Seattle Dog," is a hot dog topped with cream cheese that has become popular in Seattle, Washington.

A Swiss schnauzer is a regional variation consisting of a bratwurst served with Swiss cheese and sauerkraut. In San Diego, California, a Swiss-style hot dog called a "Swiener" is prepared with a hot dog and Raclette cheese stuffed inside of hollowed-out baguette bread.

A Texas Tommy is prepared with bacon and cheese.

All content from Kiddle encyclopedia articles (including the article images and facts) can be freely used under Attribution-ShareAlike license, unless stated otherwise. Cite this article:
Cheese dog Facts for Kids. Kiddle Encyclopedia.