Chelodina, collectively known as snake-necked turtles, is a large and diverse genus of long-necked chelid turtles with a complicated nomenclatural history. Although in the past, Macrochelodina and Macrodiremys have been considered separate genera and prior to that all the same, they are now considered subgenera of the Chelodina, further Macrochelodina and Macrodiremys are now known to apply to the same species, hence Chelydera is used for the northen Snakeneck Turtles.

Chelodina is an ancient group of chelid turtles native to Australia, New Guinea, the Indonesian Rote Island, and East Timor. The turtles within this subgenus are small to medium-sized with oval shaped carapace. They are side-necked turtles, meaning they tuck their head partially around the side of their body when threatened instead of directly backwards.

Chelydera represents those species that have often been termed the Chelodina B group or thick necked snake neck turtles. The subgenus was described in 2020 by Thomson & Georges (in Shea et al. 2020). They are a side-neck turtle of the family Chelidae with extremely long necks and long flattened heads. They are specialist fish eaters using a strike and gape mode of feeding. They are medium to large species with the largest Chelodina (Chelydera) expansa reaching shell lengths of some 45 cm (18 in). The first fossils (C. (Chelydera) alanrixi) are known from Queensland from the Eocene period (Lapparent de Broin, F. de, & Molnar, R. E., 2001).

Macrochelodina (Wells & Wellington, 1985) is a monotypic subgenus of the Chelodina. Its sole member is the enigmatic Chelodina (Macrochelodina) oblonga from Western Australia. 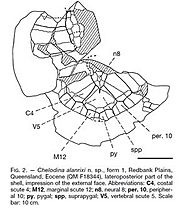 There are three identified extinct species of Chelodina:

All content from Kiddle encyclopedia articles (including the article images and facts) can be freely used under Attribution-ShareAlike license, unless stated otherwise. Cite this article:
Chelodina Facts for Kids. Kiddle Encyclopedia.