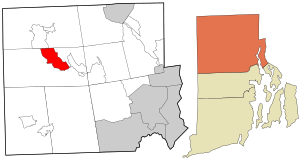 Chepachet is a village and census-designated place (CDP) in the town of Glocester in the northwestern part of the U.S. state of Rhode Island. It is centered at the intersection of U.S. Route 44 (a.k.a. Putnam Pike) and Rhode Island Route 102 (also known as Victory Highway and Chopmist Hill Road). Chepachet's ZIP code is 02814. As of the 2010 census, the CDP had a population of 1,675.

"Chepachet" was originally inhabited by the Pequot and Nipmuc natives; the name means "where rivers meet". During the American Revolution, Loyalists from Newport were exiled near Chepachet, including Thomas Vernon, who recorded election celebrations in Chepachet in 1776:

This being the day for the choice of Deputies (members of the General Assembly). We are told that there is a very great resort of people of all kinds at Chepasseh, and that it is a day of great frolicking. Our landlord and his three sons are gone, having rigged themselves out in the best manner. [A] man on horseback passed by (together with many others) with a very large bag full of cakes made by Granne West (mother to the General William West) which are to be sold to the people.

In 1842, Chepachet was the setting of the endgame of the Dorr Rebellion, which helped to win voting rights for non-landowners in a new state Constitution.

Since 1926, the town has hosted the Ancients and Horribles parade, an annual Fourth of July event, notable for its political statements and ribald humor.

In 1927, horror writer H. P. Lovecraft and his fellow writer C. M. Eddy, Jr. ventured to Chepachet in search of a place known as "Dark Swamp" of which they had heard rumors. They never located it, but the region inspired at least the opening of Lovecraft's story "The Colour Out of Space", and the setting contributed to Eddy's unfinished story "Black Noon".

In the 1940s, a US Navy auxiliary ship, the fleet fuel oil tanker, USS Chepachet, was named after the Chepachet River which runs through the village. The ship's bell is displayed at the seat of town government, and the ship's surviving crew had a 50th anniversary reunion in the town in 1998.

Beginning with a proclamation in 1976, May 25 is recognized as "Elephant Day". On that date in 1826, a popular elephant known as Betty the Learned Elephant from a traveling show was shot and killed while she was crossing the bridge spanning the Chepachet River. A group of six "hooligans" led by Canton Smith of nearby North Scituate faced charges for the crime. A commemorative plaque marks the historic location on the bridge.

In the 1990s Chepachet gained brief national attention in episodes of The X-Files, as the fictional location of the youth summer home of main character Fox Mulder. In one episode set in Providence he mentions Chepachet is "20 miles on RI Route 8". There is no Route 8 in Rhode Island.

All content from Kiddle encyclopedia articles (including the article images and facts) can be freely used under Attribution-ShareAlike license, unless stated otherwise. Cite this article:
Chepachet, Rhode Island Facts for Kids. Kiddle Encyclopedia.