Chernobyl is a historical drama television miniseries, produced by HBO and Sky Uk. The series was written by Craig Mazin and directed by Johan Renck. The series narrates Chernobyl nuclear disaster of April 1986 and the cleanup efforts that followed. It features an cast led by Jared Harris, Stellan Skarsgård, Emily Watson, and Paul Ritter. The series premiered in the United States and the United Kingdom on May 6–7, 2019. It received mostly positive reviews.

Chernobyl dramatizes the story of the nuclear plant disaster which occurred in the Ukrainian Soviet Socialist Republic (Soviet Union), showing the stories of the people who caused the disaster and those who responded to it. The series depicts some of the least known stories of the disaster, including the efforts of the firefighters who were the first responders on the scene, volunteers, and teams of miners tasked with digging a critical tunnel.

The miniseries is based in large part on the memories of Pripyat locals, as told by Belarusian Nobel laureate Svetlana Alexievich in her book Voices from Chernobyl.

Writer Craig Mazin began researching for the project in 2014, by reading books and government reports from inside and outside of the Soviet Union. Mazin also interviewed nuclear scientists to learn how a reactor works, and former Soviet citizens to gain a better idea of the culture in 1986. Furthermore, Mazin read several first-person accounts in order to bring additional authenticity to the story. He explained, "When you're reading the personal stories of people who were there — people who lived near the plant, people who worked at the plant, people who were sent to Chernobyl as part of the effort to clean it up — in those individual accounts, that's really where the story came alive".

In preparation for the miniseries, Mazin visited the Chernobyl Exclusion Zone. Mazin also did not cast any American actors, as that could potentially pull the audience out of the story.

On July 26, 2017, it was announced that HBO and Sky will produce a series named Chernobyl. It was HBO's first co-production with Sky UK. The five-episode miniseries was written by Craig Mazin and directed by Johan Renck. Mazin was the executive producer together with Carolyn Strauss and Jane Featherstone. Chris Fry and Renck acted as co-executive producers. On March 11, 2019, it was announced that the miniseries would premiere on May 6, 2019. On June 4, 2019, Craig Mazin made the original scripts of all episodes available for downloading in PDF format (see External links below). 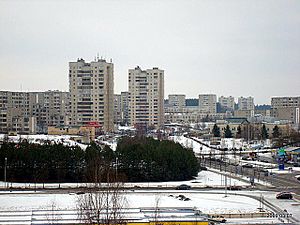 Principal photography began in April 2018 in Lithuania. Initial filming started on May 13, 2018. The majority of the filmings took place in Fabijoniškės, a residential district in Vilnius, the capital of Lithuania. Fabijoniskes has maintained an authentic Soviet atmosphere. Accordingly, it was used to portray the Ukrainian city of Pripyat. An area of densely built panel housing apartments served as a location for the evacuation scenes. Director Johan Renck heavily criticised the amount of diverse and eye-catching modern windows in the houses, but was not concerned about removing them in post-production. At the end of March, production moved to Visaginas, Lithuania, to shoot the exterior and interior of the Ignalina Nuclear Power Plant, a decommissioned nuclear power station, also known as "Chernobyl's sister" due to its visual resemblance and the nuclear reactor design used at both Chernobyl and Ignalina (RBMK nuclear power reactor). In early June 2018, production moved to Ukraine to shoot minor final scenes. The filming of Chernobyl took 16 weeks.

All content from Kiddle encyclopedia articles (including the article images and facts) can be freely used under Attribution-ShareAlike license, unless stated otherwise. Cite this article:
Chernobyl (miniseries) Facts for Kids. Kiddle Encyclopedia.