Chess in Azerbaijan facts for kids 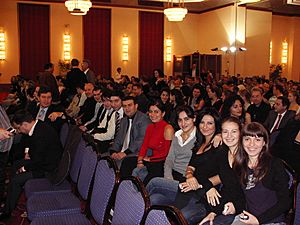 Azerbaijan's National men's and women's teams in the European Championship 2007

Chess is one of the most popular sports in Azerbaijan, where it is organized by the Azerbaijan Chess Federation (ACF). On May 5, 2009 Azerbaijani president Ilham Aliyev, who is also the chairman of the National Olympic Committee, signed an executive order starting a state-supported chess development program, covering the years 2009–2014.

History of chess in Azerbaijan

Azerbaijan as a member of the USSR

Organized chess began in Azerbaijan shortly after the creation of the Azerbaijan Soviet Socialist Republic in 1920, and the game soon became widespread. The first chess column appeared in the newspaper Bakinsky Rabochy in the early 1920s. In 1923 the first Baku championship took place.

On May 2–3, 1929, a match between teams from Baku and Tbilisi, the capital of the Georgian Soviet Socialist Republic, was held on 8 boards in Baku.

In 1934 the first Azerbaijani Championship took place. This was won by Selimkhanov, who in 1935 became chairman of the Azerbaijan Chess Organization. In 1936 the first Women's Championship was held. In 1936, A. Polisskaya of Baku became women's champion of the South Caucasus. In 1938, a women's chess school was opened at the Baku Chess and Checkers Club. However, these chess championships at the local and national level were not held every year and the World War II, disrupted the chess tournaments and activities. But since 1947 chess championships have been held every year.

After Azerbaijan gained its independence after the dissolution of the Soviet Union in 1991, Azerbaijani chess players have achieved high results in various international competitions, World and European championships. In 1992, the national team of women for the first time at the World Chess Olympiad in Manila, Philippines represented independent Azerbaijan and ranked 7th among 67 teams. The women team won bronze medals at the European Championship held in Debrecen, Hungary in 1993. The national team of men won bronze medals in 2007 in European Championship held in Greece. Men's team won the title of “Europe’s strongest team” in Serbia in 2009, then won silver medals in 2011 in Greece and in 2013 in Poland. In 2012 and 2014, the men's team “SOCAR-Azerbaijan” won the inter-club European Championships twice. Azerbaijani Grandmasters Shahriyar Mammadyarov, Teymur Radjabov and Vugar Hashimov managed to rise to the 4th and 6th places in the world rankings.

Grandmaster Teymur Radjabov became the first owner of the World Chess Cup in the history of Azerbaijan on October 4, 2019, in Khanty-Mansiysk, Russia.

All content from Kiddle encyclopedia articles (including the article images and facts) can be freely used under Attribution-ShareAlike license, unless stated otherwise. Cite this article:
Chess in Azerbaijan Facts for Kids. Kiddle Encyclopedia.