Chesterton is a small, former mining village in Staffordshire, England. It is in the town of Newcastle-under-Lyme.

Chesterton is the second largest individual ward in the Borough of Newcastle-under-Lyme. In the 2011 census, Chesterton's population stood at 7,421. 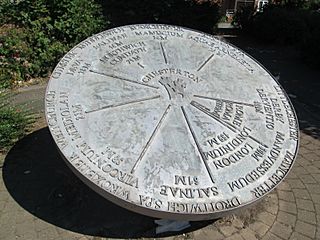 Monument showing the distance from Chesterton to other Roman settlements

Chesterton was the site of a Roman fort, built on an area now occupied by Chesterton Community Sports College. There is little indication of how long the fort was in use but it is believed to have been constructed in the late 1st Century AD. A vicus was built at nearby Holditch, where it is believed that some inhabitants may have mined for coal.

Chesterton was a parish in the Wolstanton Rural District from 1894 to 1904. Following that, it became part of the Wolstanton United Urban District until 1932, when it was added to the Borough of Newcastle-under-Lyme. The main employer in Chesterton was Holditch Colliery. The colliery employed 1,500 men and mined ironstone in addition to coal. Despite heavy investment in the 1960s and 1970s the colliery closed down in 1988, just three years after the end of the year-long miners' strike. Many of the miners transferred to nearby Silverdale Colliery, which itself closed down on Christmas Eve 1998. The current site of Holditch Colliery is now a large business park.

The Holditch Colliery disaster was a coal mining accident occurring on 2 July 1937 at the Holditch Colliery, which at one point was the main employer in the village. In total, 30 men died and eight were injured. An investigation was conducted into the indcident. The original fire was concluded to have originated in the coal cutting machine and was due to frictional heat produced by the picks in the cut with subsequent explosions being caused by firedamp. The investigation concluded that the rescue plans were insufficient and adopted to save costs at the expense of lives. Today a memorial stands to the victims at Apedale Heritage Centre. 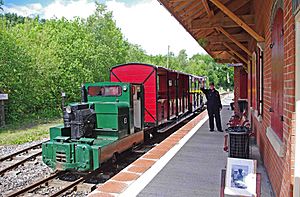 All content from Kiddle encyclopedia articles (including the article images and facts) can be freely used under Attribution-ShareAlike license, unless stated otherwise. Cite this article:
Chesterton, Staffordshire Facts for Kids. Kiddle Encyclopedia.