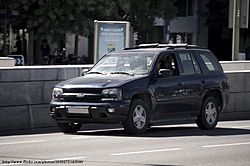 The North American Chevrolet TrailBlazer was a midsize SUV sold by the Chevrolet division of General Motors. The name came from a trim package on the S10 Blazer in 1999.

In 2002 the TrailBlazer became its own model and was made through the 2009 model year. It replaced the Blazer as Chevrolet's medium size sport utility vehicle. In 2002 it came with a 270 horsepower 4.2 liter engine. It was built on a truck chassis and came with four-wheel drive. It also had four-wheel disc brakes with an anti-lock braking system. There were two trim levels, LT and SS. The SS model came with a 6.0 liter LS2 V8 engine with 390 horsepower. The SS also had 20" aluminum wheels.The TrailBlazer also offered an extended package that had third row seating. In June of 2008 GM announced that the TrailBlazer and its siblings would be discontinued due to the decision to close Moraine Assembly. The last TrailBlazer rolled off the assembly line on December 15, 2008.

All content from Kiddle encyclopedia articles (including the article images and facts) can be freely used under Attribution-ShareAlike license, unless stated otherwise. Cite this article:
Chevrolet TrailBlazer Facts for Kids. Kiddle Encyclopedia.