Kids Encyclopedia Facts
This page is about the neighborhood. For the public park, see Marquette Park (Chicago).

Chicago Lawn is one of the 77 community areas of Chicago, Illinois. It is located on the southwest side of the city. Its community neighbors include Gage Park, West Englewood, Ashburn, and West Lawn. It is bounded by Bell Avenue on the east, Central Park Avenue on the west, 59th Street on the north, and 75th Street on the south, and is 13 km (8.1 mi) southwest of the Loop. Local citizens refer to the area as "Marquette Park," after the park in its center. 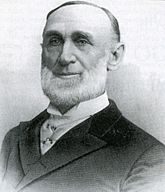 The city of Chicago Lawn was founded by John F. Eberhart in 1871. Although it was annexed by the city of Chicago in 1889, it remained mostly farmland with some scattered settlements until the 1920s. Between 1920 and 1930 the population increased from 14,000 to 47,000. Residents of German and Irish descent began to move into the area from the Back of the Yards and Englewood neighborhoods. Poles, Bohemians, and Lithuanians followed them. Most new residents belonged to various Protestant denominations, but Chicago Lawn also was home to many Roman Catholic churches and schools. Today, there are six Catholic institutions that make up the Marquette Park Catholic Campus Council. Chicago Lawn was a thriving urban neighborhood as the Depression hit the nation and by 1940 its population had reached 49,291. In 1941, the National Biscuit Company announced plans to build a huge bakery in Chicago Lawn. When completed, this was the largest bakery in one location in the world. The size of the facility was doubled in the late 1990s.

The Lithuanian community has maintained a notable presence in the area by establishing a network of institutions that earned their community the label as the Lithuanian Gold Coast. They formed some of the richest savings and loans in the city. The Lithuanian Sisters of Saint Casimir founded Holy Cross Hospital in 1928 and Maria High School in 1952 (originally established as St. Casimir Academy in 1911). The Nativity of the Blessed Virgin Mary Church was established in 1927 on the corner of 69th Street and Washtenaw Avenue. It was founded as a Lithuanian national parish and services are still held in Lithuanian. An Art Deco monument was erected by Chicago's Lithuanian community in Marquette Park commemorating Lithuanian pilots Stasys Girėnas and Steponas Darius who died in the crash of the Lituanica in 1933.

Chicago's changing racial demographics had a profound impact on Chicago Lawn. In the 1960s many of the white Americans had fled Englewood and West Englewood and Chicago Lawn became a target for civil rights groups' open housing marches during the Civil Rights Movement. In 1966, a march led by Martin Luther King, Jr., into Marquette Park met a violent reaction. King himself was hit by a rock. Violence also erupted in the neighborhood when Gage Park High School attempted to integrate after Brown v. Board of Education (1954). The primary resistance to integration came from fear of declining property values by people who put their life savings into their homes and disruption of ethnic bonds, especially for the Lithuanians. Despite that, the 1990 Census still showed Non-Hispanic whites as the largest demographic group by race comprising 43% of the population.

However, over the next decade the racial composition of the neighborhood changed radically and by the 2000 Census African Americans had become the largest racial group comprising 53% of the population, with Hispanic and Non-Hispanic whites groups accounting for 35% and 10% respectively. There are also black Jewish and Palestinian communities in the neighborhood. Some Irish, Poles, and Lithuanians still remain too, although most have moved further south and west. Many of the Lithuanians and Poles have reestablished their communities in Lemont.

By the 1920s Arabs immigrated to Chicago, and political turmoil in the decades following the 1948 creation of Israel brought more Palestinian Muslims to Chicago. Arab families live in Chicago Lawn and Gage Park Neighborhoods. Arab community founded Chicago Islamic Center and Mosque on 63rd. Many Middle Eastern store and restaurant near Mosque area. Arab families come from Palestine, Jordan, Syria, and Lebanon. In the 1950s, Palestinians with families moved out of their boardinghouses and shops and into apartments and homes just west of Chicago's “Black Belt.” By the 1970s, they formed a concentrated residential community in Gage Park and Chicago Lawn, on the South Side, and had established a business district with stores catering to Arab clientele. 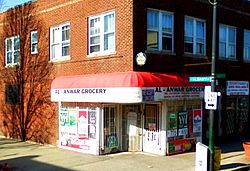 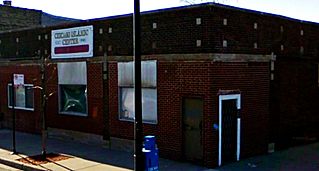 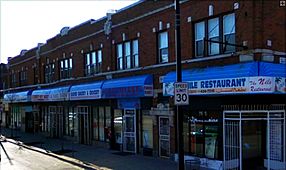 All content from Kiddle encyclopedia articles (including the article images and facts) can be freely used under Attribution-ShareAlike license, unless stated otherwise. Cite this article:
Chicago Lawn, Chicago Facts for Kids. Kiddle Encyclopedia.